KUNDO: AGE OF THE RAMPANT Gets A North American Release Date! 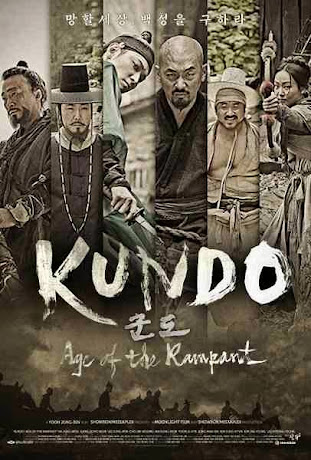 To say that director Yoon Jong-bin’s latest Korean period action epic, Kundo: Age Of The Rampant, had a great opening weekend since last Friday would be quite an understatement. To date, the film has earned KRW23.4 billion, beating out How To Train Your Dragon 2 and Dawn Of The Planet Of The Apes, while others like Transformers: Age Of Extinction and the Korean crime thriller, The Divine Move, stood their ground in the first six spots.

All in all, the film is a blockbuster success overseas, and our kind and dear friends at Well Go USA have since heard the call, with the new film being one of their four recent Korean acquistions following Cannes back in May. As such, the film is now being released theatrically in North America on August 29, and to boot, we now have a trailer for you to endulge in just below the synopsis.
Check it out and stay tuned for more info!

1859. The last days of the Joseon Dynasty, where the wages of greed bring poverty and death. A pack of bandits – calling themselves KUNDO – rise against the tyrants, stealing from the rich and giving to the poor. In an era where status is decided by birth, this band of thieves risks their lives for honor, in the name of the poor and oppressed. But for one man, a debt of bloody revenge is owed to the aristocrat that robbed him of his family and his name.

The Sexy New Red-Band Trailer For SIN CITY: A DAME TO KILL FOR Cuts Straight To The Chase! The Final Battle Highlights Eleven New Posters For THE FOUR 3D!