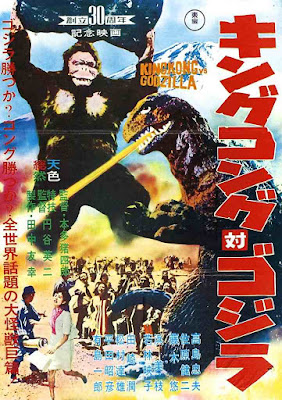 Cinematic universes have become more and more prominent in recent history with all the Marvel and DC fanfare and the currently-brewing monsterverse at Universal with Dracula Untold being a few of the latest.

When director Gareth Edwards released Godzilla last year to box office acclaim, of course many might not have predicted the film would go beyond what was already being perpetuated for a sequel. Keep this in mind now with word from THR that Legendary Pictures is now well on the way with moving their latest monster thriller, Kong: Skull Island, over to Warner Bros from Universal Pictures in an attempt to culminate an epic monsterverse that would ultimately pit the king of the monsters against the one and only King Kong!
The last time this mash-up happened was in 1962. That said, considering the nostalgic nature of most of today’s film climate along with all sorts of whimsical film combos pitting zombies, ninjas, marines, sharknados and superheroes against each other in some capacity, it only makes sense; Come to think of it, I wouldn’t be surprised if Robocop got another reboot in time to take on Terminator.
…But, I digress.
There’s no telling what this means for Toho’s upcoming foray into Godzilla as of last year, but in the meantime, Jordan Vogt-Roberts is directing Kong: Skull Island with a start date for production in two weeks. Tom Hiddleston, Brie Lawson, Jason Mitchell and Corey Hawkins are among those cast for the film’s planned release on March 10, 2017.
Legendary Pictures has had a great year so far with its business at Universal following the blockbuster success of Jurassic World back in July. Their slate currently includes Warcraft for next year, as well as the currently-developing Pacific Rim 2, in addition to the June 8, 2018 release of Godzilla 2 which will arrive before the King Kong VS. Godzilla movie mashup, as well as the June 22, 2018 date planned sequel to Jurassic World, in which case, and now that I’m thinking on it…
QUESTION: Do you think we’ll see a late addition of the Jurassic World films to the Kong Vs. Godzilla universe? Comment on our Facebook page and share your opinions!

Raman Hui's Family Adventure, MONSTER HUNT, Arrives To The U.S. Next Year! The New Poster For HARDCORE Is A Fistful!