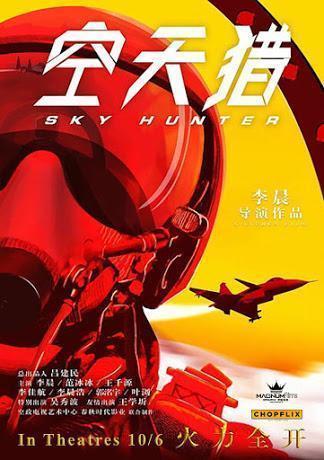 You can blame poor marketing for not knowing of this prior to this week but actor Li Chen’s new starrer and directing debut, Sky Hunter, is getting a limited theatrical release in North America this Friday. The film is already out in China as of last week as one in a string of patriotic Chinese action adventures – this from the producer of films like Wu Jing’s Wolf Warrior and its summer 2017 hit sequel.

Backed in part by the PLA Chinese Air Force and host to an array of set pieces and VFX emulating state-of-the-art military weaponry, plot details center on a team of air force pilots doing their thing to defend the country, battling outside terroristic foes and such. Actor Tomer Oz stars as the villain with a cast that rounds out with performances by Fan Bing Bing, Wang Qian Yuan, Li Jia Hang, Zhao Da, Li Chen Hao, Guo Ming Yu, Ye Liu and Lu Si Yu.

Wu Di (Li Chen), Ya Li (Fan Bing Bing), Ling Weifeng (Wang Qian Yuan), Hao Chen (Li Jia Hang), are air force pilots. During the parade, they receive a sudden test to be selected to train in the air force’s secret base called Sky Hunter. Wu Di and Ling Weifeng passed the test, whereas Hao Chen was eliminated. Through a series of training, Wu Di and four other soldiers made it to the Sky Hunter secret base. However, news broke that Hao Chen has been captured by the rebel army of B country. Wu Di leads several recruits and receives a video of Hao Chen from B Country. Ling Weifeng promised Wu Di to attack B Country and rescue Hao Chen. An air war was imminently brewing…

Chopflix is prsenting the film on October 6 in select cities throughout the U.S. and you can view the list at their official website (hat tip to Asian Film Strike via Twitter).

The film is also opening in Singapore on October 19 per the trailer below.

The Latest Trailer For FULLMETAL ALCHEMIST Is Full Of Easter Eggs And New Footage! BLADE RUNNER 2049: Watch The Three Prequel Shorts And The Final Trailer!