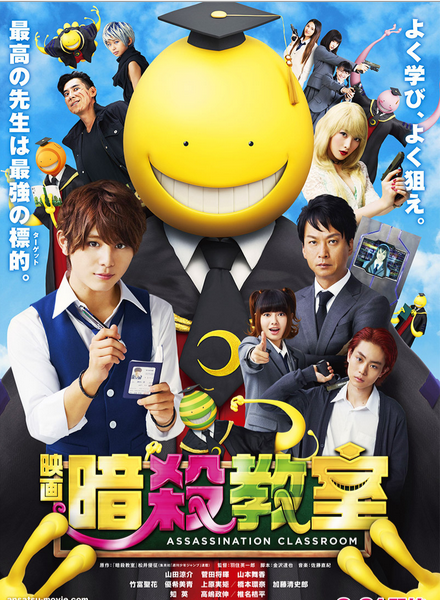 Director Furusawa Takeshi‘s latest contribution to the live-action fray of manga storytelling is set to arrive in Japan cinemas in just a few weeks in the form of the new film, Assassination Classroom. Taking the torch from author Matsui Yusei’s original publication, the film centers on the story of a classroom of unruly high school students who are promised top dollar from the government should one of them kill their new teacher – a yellow alien octopus who destroys 70% of the moon and promises to destroy Earth unless his newfound pupils can kill him, only they come to appreciate him as the best teacher they’ve ever had.

Weird eh? Well, don’t let the cheesy alien octopus smile and somewhat goofy CGI fool you. There’s still some luster here and some delightful potential. If there’s one thing I’ve come to appreciate about Japan is that for the most part, it takes its manga adaptations as seriously as America does for its comic book superhero flicks. And it shows in the final product, so by all means check out the full trailer from earlier this month and keep an eye out if it peaks your interest.
H/T: Twitchfilm

Harrison Ford To Return In BLADE RUNNER Sequel With Denis Villeneuve In Talks To Direct Watch The Latest Trailer For The Upcoming Home Release Of HALO: NIGHTFALL