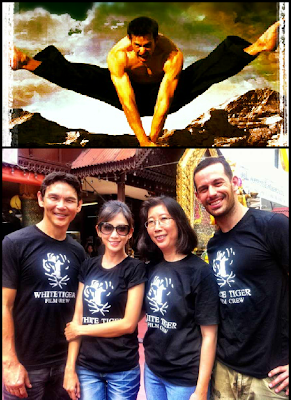 Action superstar Don “The Dragon” Wilson shared some new pics from the Thailand set of the upcoming Toby Russell film White Tiger, also starring Cynthia Rothrock and the late Joe Lewis, with Team Sideswipe’s own Matt Mullins in the lead, and featuring action choreography by Kazu Patrick Tang. A tweet from Mullins on January 14th suggests we might not see a trailer for a little while longer. However, keep an eye out for a trailer for another film he will star in called King Of Vajara later this year.

Meantime, feel free to LIKE White Tiger on Facebook, be sure to visit MattMullins.com for more info!

(Photo composite by myself and Keith Atkins)