Ochiai Ken's UZUMASA LIMELIGHT Is Headed To The U.K.! 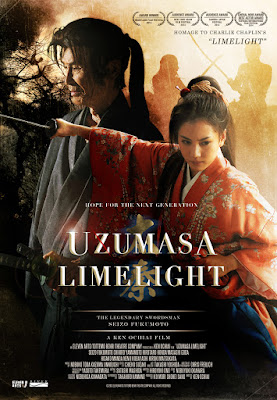 Ochiai Ken‘s suspenseful swordplay drama, Uzumasa Limelight became an award-winning festival sensation during its run last year and it’s safe to suggest that many of the critics who have seen it all stand behind this one. It’s an ardent homage to a bygone era of stylish stunt acting with longtime veteran Fukumoto Seizo in his debut lead role after half a century of having established himself in the world of swordplay genre and action on film, which undoubtedly makes Uzumasa Limelight one worthy of moviegoers’ utmost attention.

Uzumasa (Kyoto) is considered the Hollywood of Japan.

It has produced many “jidaigeki” films (period dramas with sword fighting) that are loved by many Japanese, and are highly praised all over the world. These films wouldn’t be what they were if it weren’t for the “kirareyaku” (actors whose main job is to be killed by the lead star). Men who are killed, without ever being lit by the limelight…

Third Window Films is releasing the film in the U.K. with a date soon to be announced and Twitchfilm brought the exclusives, including a trailer for you to watch below.

Terminator Contest: Win Your Own T-800 Model From Sideshow And ThinkGeek! Higuchi Shinji’s Live-Action ATTACK ON TITAN Is Coming To FUNimation!