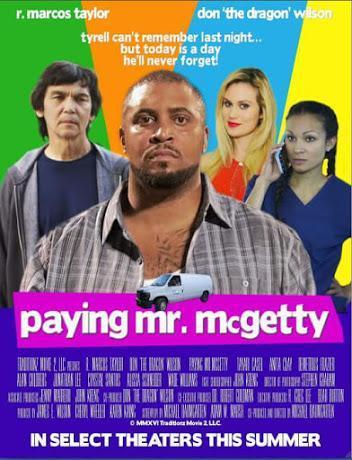 Last year’s momentous run of director Michael Baumgarten’s anti-bullying drama, The Martial Arts Kid, is now paving the way for Traditionz Films’s newest contribution to the film front with the new action comedy, Paying Mr. McGetty. Don “The Dragon” Wilson will be returning to the fray along with actor and stuntman R. Marcos Taylor now debuting in a lead role after briefly going toe-to-toe in Baumgarten’s previous film.
Those of you none too familiar with Taylor can currently spot him in F. Gary Gray’s Straight Outta Compton in a winning performance as Suge Knight. Here, from a script by Baumgarten and co-scribe Adam Marsh, Taylor stars as Tyrell, a floundering music producer who wakes up one morning next to a mysterious woman and no recollection of the evening prior, along with a phone call from his girlfriend over an eviction notice, and mobsters looking for him at the behest of a local top crime boss.
Joining Taylor and Wilson, the latter now playing a villain, are actresses Anita Clay and Alissa Schneider, actors Demetrius Frazer, Wade Williams and Maurice Elmalem with Dr. Robert Goldman, and Tai Chi master Oso Tayari Casel starring. The word is a release can be expected as soon as this summer so check around and back for more info. (H/T: World Film Geek)