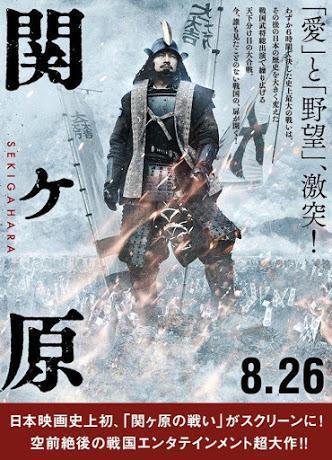 Author Shiba Ryotaro passed away in 1996 whilst leaving behind a memorable body of literary work largely focused on historical events in Japan. One such publication arose thirty years earlier with Sekigahara, now the primary focus of The Climber’s High helmer Harada Masato’s latest period drama highlighting an intense looking tale of wartime romance.
For this, we now have a first official trailer for the film which opens in Japan on August 26 and while there’s not much to look at in romance, the footage offers plenty in the vicinity of violent upheaval and drama. The film stars Library Wars trilogy star Okada Junichi opposite actor Yakusho Koji of 13 Assassins and The World Of Kanako fame, and actress Arimaru Kasumi from the March Comes In Like A Lion films.

In order to end the Sengoku period and determine a ruler for the new era, on October 21, 1600 the Battle of Sekigahara takes place between the Western Army, led by Mitsunari Ishida, and the Eastern Army, led by Ieyasu Tokugawa, who attempts to keep a hold of the nation within his greedy grasp. Even though the Western Army are believed to outnumber the Eastern Army, they take losses on the battlefield. A hidden truth exists. Hatsume was sent to spy on Mitsunari Ishida, but falls in love with him.