Review: BUSHWICK Catches You Between The Mood, New York City, And Civil War

Fast forward three years later and having proven themselves in the public arena with the 2014 horror favorite, Cooties, directing duo Cary Murnion and Jonathan Milott are back with their latest conceptual head-turner. It is one that stems from darker auspices eeriely forecast through a nightmarish lens unto today’s American politics for something of pure fantasy and, ultimately, a show of strength in character-driven storytelling that is sure to leave an impression.
For better or worse, Bushwick, in part, accomplishes this in the course of its kinetic, steadily and often fast-moving pace from a script by Nick Damici and Graham Reznick. Actress Brittany Snow takes the lead with actor Dave Bautista as the two shepherd the narrative in the respective roles of Lucy and Stupe, oddly and reluctantly paired as they fight to survive deadly skirmishes with an invading Texas militia canvassing the neighborhood with deadly force as part of a multiterritorial effort toward seceding from the Union.
Aesop Rock sets the tone accordingly with an edgy score as Cooties cinematographer Lyle Vincent immerses you into the quiet suburbia neighboring the East River with choppers hovering above throughout the opening credits. The first principal shot with dialogue from our cast is an omen of what’s to come in both vision and formula; wherein today’s film climate sees a sometime uptick of one-take thrillers, films like Bushwick are a bit more practical with its shooting and editing. Long takes are tantamount to the film’s progress and treatment of our characters as we follow their perilous journey of unrest and self-discovery.
Most intriguing are the characters themselves as the film’s primarily focus in place of simply pitting our protagonists against a single, tangible villain – a smart move for a movie with a set battlefield bigger than its duration can explore. Caught in the anarchy are characters Lucy – a college student home to visit her grandmother, and Stupe – a former Marine medic with a tragic past living in a dilapidated basement. Actress Angelic Zambrana makes her entrance in the third act as Lucy’s sister, Belinda, inebriated, strung out and unaware of what’s happened to her neighborhood until moments later.
The action is almost non-stop as the camera follows along, nary taking an eye off our characters as they race between blocks and buildings, hiding as often as possible from militiamen canvassing the neighborhood. Best of all is Lucy’s own evolution in the film. Her reliance on Stupe’s instincts isn’t absolute but she’s not so dismissive as to try and be too bold while she struggles to keep up with the reality of suddenly fighting her way out of a warzone.
Bautista, naturally, is prime here for the film’s key fight sequences – one in which the lensing may leave a lot to be desired if tight shots aren’t your thing. Prudent to the matter, with Bautista, is his substance as an artist; Not typically the one to generate Oscar buzz, still, as exemplified in a few titles of his filmography, he continually does away with actor/wrestler stereotypes that would pigeonhole almost anyone else, generating empathy and vulnerability to a stoic, damaged character struggling to keep going. 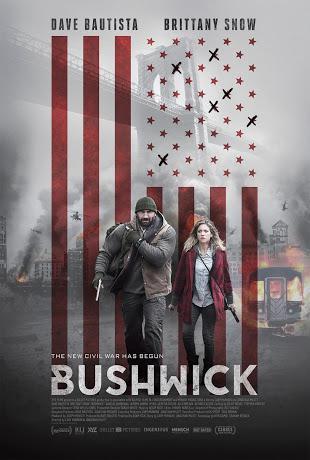 Amid the film’s backdrop are a mix of people either fighting against the militia, rioters and looters attacking innocent people, and victims desperately hiding from the terror that awaits outside. These all encompass the film’s vast, dark, embattled suburban atmosphere with a storyline that boldly confronts some of our worst prospects as a nation while using it to foundate the film’s emotive drama and suspense. The finale sequence is stark, grim view of our skyline, as necessitated for a film of this caliber.

Just shy of having Christopher Cross’s theme from Arthur as the outro, Murnion and Milott bring something eerie, inventive, and almost world-building in a sense. It could be a bit challenging depending on the viewer, while all the more clearer is the fact that they deliver a haunting gut punch of a thriller in Bushwick. It’s a film that sets the drama right smack in the middle of harm’s way and, for all intents and purposes, keeps you compelled, and watching to the bittersweet end.