Want to know what I like about filmmaking? Anyone can do it. Want to know what else I like about filmmaking? ANYONE can do it. Now don’t take this from me as being patronizing. I really do say this from the exact opposite end. Filmmakers come from all walks of life and backgrounds and when one of those backgrounds happens to be in martial arts you get a very unique kind of filmmaker who can produce art with the discipline developed over years of pushing one’s boundaries. It’s a background that I am glad to say I can share with filmmaker and action actor Jino Kang.

Fist 2 Fist 2: Weapon of Choice is a sequel in name only to Kang’s 2011 film Fist 2 Fist and brings with itself a brutal action packed story to the screen that lends a brutality to it akin to John Wick or Taken. Written, Directed by, and starring Jino Kang, we get to see another compelling piece released by the martial artist turned filmmaker. Fist 2 Fist: Weapon of Choice follows the story of Kang, a retired hitman, as he has to rescue his “daughter” Jaime (Kelly Lou Dennis) from his former boss Banducci (Douglas Olsson). Being the mafioso that he is, Banducci ends up pulling some favors with the law to make it harder for Kang after he decides to take a break from retirement. Soon he teams up with rogue cop Ash (Katherine Celio) and all hell breaks loose as they set out to get Kang’s daughter back.

The movie starts off by hooking in the audience with a brutal action sequence to set the tempo. Action is definitely not something this film shyed away from. Numerous people meet their end at the hands (or barrel) of Kang throughout, and we see a good display of Hapkido and Brazilian Jiujitsu employed. In fact the portrayals of the martial arts in the choreography were pretty accurate and moments of struggle between characters were common in each action sequence. At times things lull because of character moments where they feel fatigue, characters occasionally need to shift to cover for mistakes they have made, and for a film that had a low budget, it goes for some pretty brutal moments to kill and maim its bad guys. Kang behaves similar to John Wick. Everything is straight to the point, functional, and relatively simplistic. At times we see some more fancy moves thrown, but the choreography decides to streamline itself so the plot can keep moving. Shot choice in the action is not flashy, but gets the job done, however at times I felt like that something was either lacking in the general coordination or the editing of the fights as there are moments of ‘Oh I’m a bad guy and my buddy got killed so its my turn to fight the good guy’. They feel a bit disjointed as opposed to flowing smoothly as a cohesive fight scene.

Unfortunately, while the action was intriguing and drew me in, the plot left something to be desired. While setting up a multi-tiered story with relatively complex characters with depth in their relationships, Fist 2 Fist: Weapon of Choice seems to come up short in that department about halfway in its storytelling. The movie starts off fast paced and the plot moves along swiftly in the first act, but by the middle of the second act there’s definitely a lull in both the action and plot that seems a bit forced for the sake of exposition. On top of that there were moments where I questioned motivations for the characters and felt the plot only moved for the sake of moving leading up to the third act. It’s very heavy on the action on the beginning and ending while not so much throughout the middle where I felt more was needed near the middle of the second act to jump start the plot. 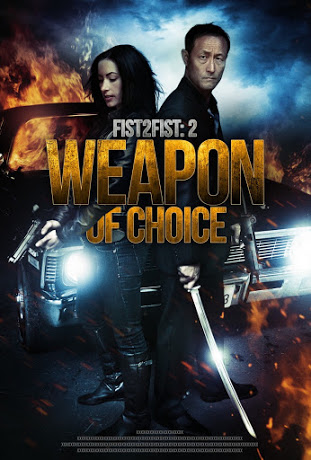 Despite these flaws though, I was entertained by Fist 2 Fist: Weapon of Choice. Making a film is not easy work, not many people have the stomach for it once they realize what it entails. However I’m happy to see passionate filmmakers going out there, hustling, and getting their hands dirty. Jino Kang’s latest action flick may have had some rough edges, but overall I sat down, screened it, and enjoyed watching an action film that tackles a lot more than other action films out there, using elements of the current trend in film and television of an in depth universe and brutal bare bones nitty gritty action.

BLADE OF THE IMMORTAL Teases Our Villains In New Character Promos Karl Urban Revenge Actioner, BENT, In The Works At AMBI