I don’t usually listen to independent rock. It’s not that I have an issue with it, really, but that it never stays in my purview long enough when it appears, and I like listening to it when it does. In this instance, filmmaker Christopher Zatta’s pick of choice is a real gritty, groovy theme that plays at least twice in his latest ambitious short film, Imbroglio, coming out of its debut at Fantasia Festival this week.
With Tracy (Alina Andrei) in his possession, Kyle (Joseph Michael Harris) leads his own group of criminals as they stage a trade-off of for his brother, Pete, believed to be held hostage by David (Travis Johns) whose own group, has Anna (Zoë Bell) seeking vengeance against Kyle’s over an earlier conflict. The standoff begins only to escalate even further when a dark twist is revealed, augmenting an already convoluted situation and ensuing a violent recapitulation from both sides in a hail of bullets, blunt force and vehicular destruction.
Zatta is no stranger to the process as this marks his fifth shortfilm directing credit next to others on several major television shows, including Marvel’s Daredevil, and Heroes, in addition to his 2014 feature debut drama, At The Maple Grove. Going into Imbroglio, you’re immediately pulled into something edgy, self-aware and direct in its approach. You know Zatta isn’t here to dance around anything with respect to the narrative, story and the action which makes the pulsating tension and build-up to the climatic and bloody second half all the more rewarding.
The cast is an exemplary line-up and with a script by Zatta that fleshes out specific characteristics from our principle players – most being motivated by violent, extreme means and measures. Mininal reference to the unseen events building toward the top of the film leaves room for all else to fall into place as we get to know both gangs and personalities of their members, such as that of Bell’s Anna, the brief dichotomy explored between actors Jason Tobias and Diosiq Burnè in the respective roles of Joey and Mike and their own proclivities. Stuntman and actor Robert Dill plays Ethan to girlfriend Rebecca, played by actress Kiralee Hayashi in a young couple pairing that antes up the stakes. 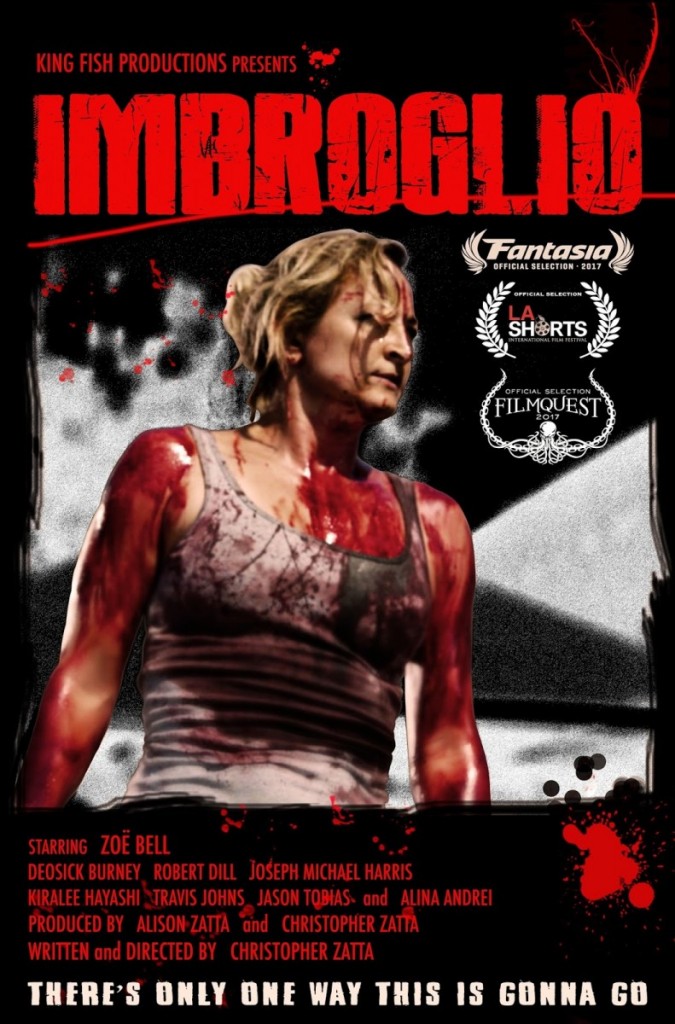 Bell, nowadays more than a stuntwoman as she’s flourished even more as an actress since showcasing a balance of both fields in projects such as Grindhouse: Death Proof (2007), and Josh C. Waller’s action horror, Raze (2013) and Camino (2015), stands out with poignance and fury as Anna and the one to root for in the second half. Alex Daniels coordinates the stunts and action to splattering appeal, orchestrated between a bloody close-quarters knife scuffle, and a raging shootout where secrets are exposed in the heat of the moment, allies are used as human shields, and all are subject to their fates one way or another.
You get the feeling that Zatta has seen his fair share of movies in his lifetime and an idea of his influences, lending greatly to the shock value of the violence that plays out. Aforementioned music by New York rock band, Wall, sets the theme amply and essentially lays the groundwork for a story rife with intrigue, fresh and fitting performances, all capitalized with explosive action and a strong, signature female lead.
The conclusion boasts an eerie, grisly finish laced with a fitting, sardonic touch that culmimates Zatta’s proof-of-concept for an arguably doable feature film series expansion. All in all, the potential is definitely there for something original to invest in with Imbroglio whose aspiring sophomore feature director could use a solid boost.