Review: INCARNATION (2018) Woos You With Its Hitchcockian Charms 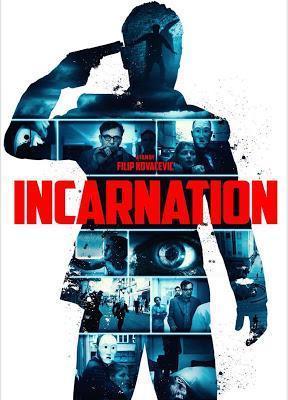 Who would have ever guessed that the Groundhog Day approach to movie plotting would prove so effective for the action genre?  From studio blockbusters like Live.Die.Repeat to indie fare like the Rope a Dope series, time loops seem like a great way to frame balls-to-the-wall action.  Now, writer/director Filip Kovacevic takes the genre in a more cerebral but no less thrilling direction with Incarnation.

A man wakes up in a square of an unknown city.  He has no idea who he is or how he got there.  As he stumbles around the square trying in vain to get answers, he is pursued by three masked assassins.  The men corner him and gun him down only to have him wake up again on the same bench.  The man is stuck in a time loop he must desperately find his way out of.

Incarnation is a masterclass in audio/visual storytelling.  Much of the film takes place in the city square, which is shot beautifully and is presented in such diverse ways that it never loses its intrigue.  The visual storytelling is so on point that you could watch the film on mute and still be able to follow its (admittedly simple) story.  The film’s audio and score only serve to complement the visuals with one huge exception (more on that later).  You can see the incredible thought and care put into every moment of this film as it woos you with its Hitchcockian charm.

Lead actor Stojan Djordjevic is tasked with carrying the movie almost exclusively on his shoulders as the amnesiac Covek.  Though he does encounter other characters in his search for answers, their presence is fleeting and none make a real impact; something that creates a palpable sense of loneliness and isolation for the lead.  Djordjevic performs admirably in a role that demands he give an impactful performance without the crux of dialogue to help sell his turmoil.  While much of the film plays as a tense chase, when the situation does come to blows Djordjevic handles it like a champ.  He performs the choreography and stunts admirably in a knock-down, drag-out fight toward the end of the film.

(note: the following criticism reflects the English dub of the film that was provided for review.  I can’t speak for the subtitled version at this time)
Where Incarnation stumbles is when it feels the need to apologize for its own cleverness.  Despite the film’s brilliant use of visual storytelling, it often feels the need to shoehorn in voice over to make sure that nobody gets lost.  This attempt to avoid alienating, let’s say…  less sophisticated audiences actively hurts what could have been a brilliant film.  Oftentimes, the v.o. just tells you things you already know if you’ve been paying attention and doesn’t add anything to the story.  Unfortunately, this level of idiot-proofing also manages to undercut the film’s ending.  It’s hard to say if the intrusive narration is part of the original film or the result of an American distributor’s meddling; a similar thing happened to the film Avalon (2001) to equally disastrous effect.

Incarnation could have been a great cerebral thriller but is held back by intrusive narration that undercuts the power of its visual storytelling.  In many ways, it feels like the kind of action movie that Alfred Hitchcock would make (if he’d made action movies).  Maybe there’s another version out there that doesn’t feel the need to stand over your shoulder and explain the plot, and if so you should definitely watch that film.  Or just hit the mute button and bask in the glory of a very well done silent film.  Writer/Director Filip Kovacevic is definitely a talent to keep an eye on, but one would hope that people trust his artistic instincts more in the future and not try to dumb down his vision.