Review: MANCHESTER BY THE SEA Acclimates Drama With Perspective And Revelation

Manchester By The Sea opens on a flashback, but you don’t realize this until later. That’s not a spoiler, it is thematic layering. Director Kenneth Lonergan began his career on the stage in 1996, finding success with his play, This Is Our Youth. And it seems that Lonergan -interesting that the first part of his surname is “loner”- has continued to explore, and mature within, a study of recurring themes; maturity through loss, a discovery of love’s thesis through our responsibilities to one another, to our loved ones and to community, and death. Revelation in death, through means of what can be described as an earnest deconstructive lens pointed towards our collective misunderstandings of death (of existence itself, and therefore the quest!) as a consequence of fear.

It is notable that Lonergan was responsible for the screenplays of both Analyze This (1999) and You Can Count On Me (2000), the latter of which he directed.

This picture’s star, Casey Affleck, has been on a similar journey; From The Assassination of Jesse James to Gone Baby Gone, Ain’t Them Bodies Saints to Out Of The Furnace, Affleck has been fine tuning a body of work in study of ennui – catechizing it’s fathomage. Here, he plays Lee Chandler, a sullen handyman wasting away in Quincy, Massachusetts. He borders on the saturnine, too removed even for the genuine sarcasm of a once idealistic man gone cynical. Instead he’s just empty, broken. If there’s anything left, it’s anger. Lots of it. But we want to know why. This ever is Affleck’s charm.


The film wastes no time in presenting the damage of its emblem; Lee is so departed from life itself that he observes no concept of discretion, there is no filter when he speaks, and he either doesn’t recognize it when a woman is obviously flirting with him or he doesn’t care; not so much stoic but austere. Whatever broke inside of him, he never fixed it.

We’re taken through a montage presentation of his “life”, as it were, a thing we must refer to in the parenthetical; he does some plumbing work, ruffles the feathers of some clients with his attitude and perpetual inability to communicate with human, albeit civil decorum and gesture. Then he gets a phonecall. There’s trouble back home, the sort of which that he must immediately stop what he is doing for to take the long commute through heavy traffic to Manchester.


He already knows what’s happened – his brother is dead. The confirmation for Lee when he arrives at the hospital isn’t met with the usual shock that hits despite knowing a loved one lived in a perpetual to-and-go. Instead, there is a long sigh. And then an immediate return to pragmatism. “So… what’s the procedure?”

I promise it plays much more depressing than it reads. The scene and its nexus, they touch upon a hard memory of mine. At first, the email (yes, email) informing me that my best friend was dead, and then, the punchline, seeing him in the casket. I remember the pain captured in his face, either the fault of the funeral home’s negligence or the immutable stamp of fright, revelation, and excruciation caused in his moment of death. My friend, he died from a fall off a high balcony. Internal bleeding, so yes, not immediately. And not without suffering. Lee’s brother, played by Kyle Chandler in flashbacks premised at the film’s opening, does not die this way, however. His death was from collapse at the culmination of a degenerative heart disease. And yet, the yardstick of civilization is the prominence of mortal surprise; it will do its work on each of us differently, but it WILL do its work.

Chandler plays, well, older brother Joe Chandler, with the exigency carried over from his series character John Rayburn on Netflix’s Bloodline, the browbeaten patriarch of an explosively unstable yet high echelon family. It matters that his role in this movie can be described as unforgiving, since, indeed, I would argue in earnest that it is precisely the point. Joe, in his few scenes, heralded by the film’s preamble, barely says anything or exists, for lack of a better description, as a character at all. He is more like a Christmas tree left up two weeks into January. A narrative paperweight.

The emotional connection is there, the importance, that is, as an avatar, exists despite its roadside presence. Joe is dead upon arrival, so he doesn’t get to speak for himself. A big deal is made of him being frozen on ice (more on that in a bit). It is as if he knows that he is dead, and that in the scenes wherein he is showcased, is is tempting to imagine he is secretly a morose time traveler, reliving the days leading up to his death without a thing to do about it.

Or, maybe, he COULD do something, to prevent his demise, as a time traveler after all, but won’t break the oath because his integrity is thus. Kyle Chandler, as an actor, and as these two references from his body of work, projects this hue of agency. It also speaks to the agency of such things, daring risk of sounding esoteric. How people we lose, more and more as time goes on after we lose them, our memories of them while living take on the shape of a totem for loss and gain; a collection of parables, embarrassing us for imagining the paper they’re written on as “rustic”, but acquitting us as well.

Lucas Hedges is Patrick, Joe’s 16 year old son. Lee is the one who has to go to his school and give him the news. He finds him at hockey practice, immediately showing signs of having much in common with Lee in terms of temperament and aggression. We are slowly being taken through the wreckage of whatever life that Lee left behind, through family members we meet who are also bearing scars. 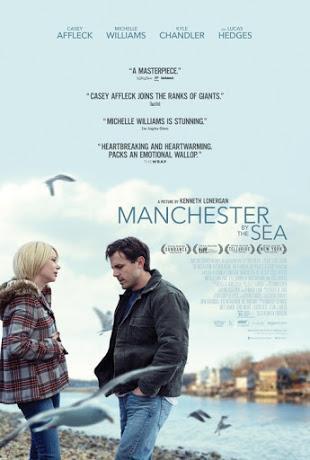 The relationship between Lee and Patrick is as interesting as it is inclement. They argue for much of the film, some of it funny and some of it you expect might erupt into violence. A particular interplay are the many instances that Patrick flaunts his promiscuity in front of Lee, speaking nonchalantly about the parade of girls in his life. You keep expecting that moment that happens, when the patriarch, in this case Lee, either nods and smirks in secret admiration of the boy. That scene never comes. And you suspect it’s because Lee has seen too much, is too far past the event horizon of damaged himself to even recall the joy of affection, its mystery, or even its triumph. It’s value. Lee, he remains unflappable.


Michelle Williams is Randi, Lee’s ex-wife. She’s moved on, it seems… Has a family, a new husband and baby, but even she is shattered by the past.

What past? I won’t go into those details, or their connections. Instead, I will let the movie open up to you, and do its work.
I will draw attention to a recurring theme in the film; the cold. The story takes place in Winter. It is snowing. Much fuss between Lee and Patrick surrounds the fact of Joe’s body being kept in a freezer.

“It just freaks me out,” Patrick confides.

The more you think of it, of the implications, the more you, dear viewer, may be freaked out as well.