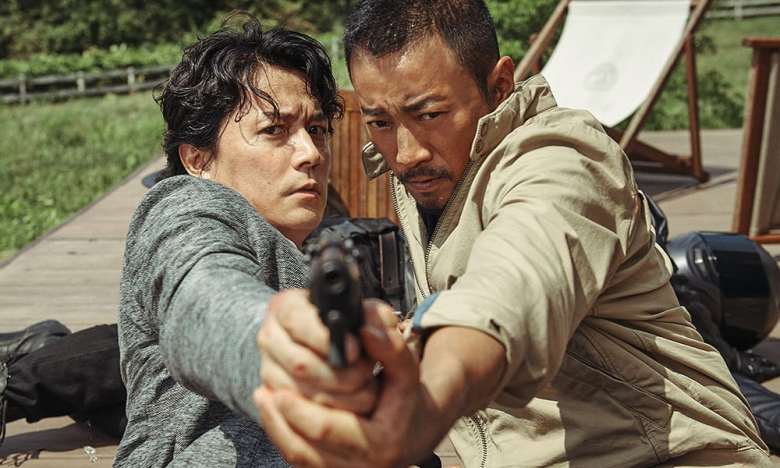 Wanna feel old?  Last year, the film Face/Off (John Woo’s last true heroic bloodshed epic) turned twenty years old.  It’s been an interesting two decades for the man who helped redefine the action genre.  He butted heads with Tom Cruise over the flawed yet entertaining Mission Impossible 2, dove into hard sci-fi in the ironically titled Paycheck (so many Affleck jokes) and torpedoed his Hollywood career with the expensive (and ultimately unsuccessful) war epic, Windtalkers. Then he entered the Chinese film market with a pair of grand, two-part epics in the form of Red Cliff and The Crossing.  Finally, after all these years, the maestro has returned to the kind of dual wielding spectacle that made him famous. But does he have another symphony in him?

A remake of the 1976 Japanese thriller starring Ken Takakura of Black Rain fame, this slick thriller follows Chinese lawyer Du Qiu (Hanyu Zhang) who is framed for murder in Osaka, Japan. Qui is forced to become a fugitive when he finds that even some of the police are in on the conspiracy he’s just become a pawn in.  Tough yet eccentric Japanese cop, Yamura (Masaharu Fukuyama), is assigned to the case but soon begins to suspect fowl play.  Soon, both men are literally handcuffed together and on the run from an army of thugs and two deadly female assassins, Rain (Ji-won Ha) and Dawn (Angeles Woo).  Unbridled action insanity ensues.

Woo’s work was always an exercise in extreme style, and Manhunt is no different.  With freeze frames, dissolves, slow motion and physics defying action, this film is classic Woo…  Maybe a little too classic.  There are times when it feels like Woo is aping his own style a little too much; as if he’s shaking off the cobwebs and is being careful not to go too far off the beaten path.  The film might feel stale if it weren’t for the fact that we haven’t seen much else like it since the 20th century came to a close.  If anything, Manhunt feels like a throwback to Woo’s pre-Hollywood films when he wasn’t trying to conform his style to meet industry expectations.  In many ways, Woo’s style is so unique that it’s hard to view it as stale.

It’s easy to take for granted just how revolutionary Woo’s brand of action was back in the 90s.  Where many of his Hollywood contemporaries dealt in grand spectacle, Woo specialized in intricate spectacle.  Whether it was a hallway shootout or a massive gunfight in a hospital, the execution of his action always felt masterful.  Every shot, every movement is choreographed like a dance number…  he also likes motorcycles and doves (so many doves).  The moment the bullets start flying in Manhunt, there is no question who made it happen.  Everything we loved about Woo’s brand of action is present here, melodrama and all.  In addition to the film’s epic gunfights, there’s a surprising amount of hand to hand combat on display.  Melee fights aren’t something that John Woo is known for, but he handles them as stylishly as his gunfights; kinetic camera, slow motion hero shots, and great storytelling through violence.

The film’s cast is solid but a little unspectacular. Hanyu Zhang and Masaharu Fukuyama are a good screen duo and watching them engage in an intense action sequence while handcuffed together is something to behold.  The film’s two femme fatales, Ji-Won Ha and Angeles Woo (yes, she is John Woo’s daughter), get some great action scenes and surprisingly tender character moments; they help to break the problematic archetype that women always fall into with his films.  These two are far from damsels in distress; in many ways, they’re more badass than the film’s two leads.  Unfortunately, Manhunt’s cast pales by comparison to Woo’s classic Hong Kong collaborators such as Chow Yun Fat and Tony Leung.  They can’t even compete with his Hollywood go-tos such as John Travolta and Nicolas Cage.  Woo’s brand of over-the-top melodrama takes a certain kind of actor to truly shine; the cast of Manhunt does a serviceable job here, but the film could definitely stand to shine brighter.

Manhunt is a fast-paced, immaculately shot, thrilling actioner that would be considered greatness if it were made by any other filmmaker.  John Woo’s legacy looms large, and Manhunt feels like Woo shaking the rust off.  It falls solidly into the middle ground of his filmography with Once a Thief, Bullet to the Head, and maybe Broken Arrow.  It says a lot about Woo that even his middling work is superior to most other filmmakers’ best.  With any luck, Manhunt will be remembered as the warmup film that leads to a new action classic from one of the genre’s greats.  If this turns out to be Woo’s final foray into heroic bloodshed, then he could do a lot worse than Manhunt; it’s old school and ridiculously entertaining, but you can’t shake the feeling that the maestro is capable of greater works.

For those of us who are too impatient to wait for Manhunt to land on US shores, the film is currently available on Blu Ray, DVD, and VCD (the master of all formats) at DDDHouse.com!