Review: THE MARTIAL ARTS KID (2016) Brings Its Message To The Forefront Of Style 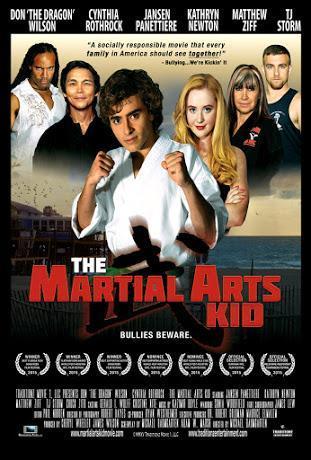 In the last eight years, we’ve been treated to not one but THREE different reimaginings of The Karate Kid: the official one (Karate Kid), the gritty one (Never Back Down), and now we have the family film. Who’d have ever guessed that The Karate Kid would become such a cultural staple?
The Martial Arts Kid follows the story of Robbie Oakes (Jansen Panetierre), a juvenile delinquent who is forced to move in with his aunt and uncle in Florida after a run in with the cops. Fortunately for him, his aunt and uncle are portrayed by total badasses in the form of Cynthia Rothrock and Don “The Dragon” Wilson. At first, Robbie couldn’t be any less engaged with his new family situation and has almost no luck fitting in at school. What’s worse, within the first 24 hours he meets the girl of his dreams (Kathryn Newtown) and promptly gets punched out by the evil bully who happens to be her boyfriend (Matthew Ziff).
The film’s opening act feels like a bit of a slog; as if it’s just something we have to get through before the real story kicks in. Once Robbie is introduced to the martial arts and begins his training, the movie really comes alive. From the moment that Robbie steps into a dojo, it becomes obvious that THIS was the movie that everyone involved was passionate about making. Watching his growth and development through the martial arts will be instantly relatable to anyone who’s ever trained in them. There’s no wax-on, wax-off philosophic here, just hard work and discipline. Its portrayal of martial arts training is easily the highlight of the film.
In a lot of ways, The Martial Arts Kid looks and feels like a throwback to the martial arts films PM Entertainment was making in the 90s; the kind of films that Wilson and Rothrock used to star in. The fight scenes, choreographed by James Lew, are also reminiscent of that bygone era with a more grounded approach and less emphasis on flashiness. This approach may not stun action fans, but that’s not the point; this is a family film first and foremost and the action serves that end. It’s also good to see that Wilson and Rothrock can still throwdown with the best of them.
As the story progresses, it has important things to say about the role of martial arts in people’s lives as well as the current state of MMA vs traditional styles. The Cobra Kai style villains appear in the form of Dojo Extreme, a brutal MMA gym and its combat-for-domination focused owner, Coach Kaine (T.J. Storm). Kaine’s teachings fly in the face of the things that Robbie has been learning from his Aunt and Uncle and, to make matters worse, he’s also been training the bully who’s been harassing him since day one. The conflict between good and evil seems inevitable from the start. The film is also peppered with cameos by well respected members of the martial arts community, often playing themselves.
If you’re looking for an all-out action movie, then The Martial Arts Kid isn’t the film you’re looking for. This is a family film through and through, something that you can show to kids to entertain and give them positive encouragement. The film’s portrayal of the martial arts is heavily focused on hard work and discipline over instant gratification and violence. Robbie’s development as a martial artist is easily the most gratifying part of the film and may be inspiring to those who watch it.

The Martial Arts Kid is now available on DVD, Blu-Ray, VoD and iTunes. Head over to the official website to purchase your copy along with other merchandise, and stay tuned for more info!

Scott Epstein Sets His Sights On The Fight In The New THE BUTTERFLY GUARD Teaser Trailer BLOOD FATHER Gets A Close Shave In The New Poster!