Review: MILES AHEAD (2016) Is Chromatic Testimony Of Life, Love, Turmoil And Groove

There is an old rumor that Ernest Hemingway could only write when he was in love, and that each of his books represents his love for one woman. It’s a nice story, if even only a reverie, and it came to mind while watching Miles Ahead, Don Cheadle’s directorial debut of the Miles Davis biopic. The short-lived love affair and marriage that Miles Davis had with Francis Taylor is a referential centerpiece of the film, and is presented as being inexorable to the reason for the jazz musician’s five year hiatus from music, during which he spiraled into drugs and reclusiveness, earning him a historical association with the eccentricities that characterized even Howard Hughes.

Cheadle co-wrote Miles Ahead with Steven Baigelman, Stephen J. Rivele, and Christopher Wilkinson. It is based on the life of the great jazz musician, and the story is told in free form and flashback -as if, I might add, to capture the flow of music itself. It works.
Cheadle plays Davis himself, and as we find him in the 70s, he is holed up in seclusion following the failed marriage to former dancer Francis Taylor. He flirts with self destruction through drugs in a hailstorm of traumatic memories of his past, which provide a narrative in subplot of his meeting of Francis, played by the lovely Emayatzy Corinealdi, during the time that she was his muse. This through line explores several of Davis’ most renowned and congenial recordings, such as the mesmerizing Agharta from 1975, Kind of Blue from 1959, “Someday My Prince Will Come” (1961), and even Bitches Brew from 1970, which he recorded just before his hiatus and downward spiral.
Ewan McGregor plays a fictional journalist of Rolling Stone magazine, David Braden, who at first forces himself (and quite laughably) into Miles’ home after we see the lonesome genius wandering about his disheveled quarters, music and clutter strewn everywhere, the artist limping from the pain of a deteriorating hip and trying to shake some of those traumatic memories I mentioned earlier.
Braden pays for his intrusion, however, with a clean punch to the face (Miles, it turns out, dabbles in boxing and is something of a connoisseur of the sport), but eventually wins Davis over after a series of outrageous pratfalls. There’s humor in it, to be sure. But it’s not played for laughs, if that makes sense. Indeed, this story is about an ailing and deeply depressed musician who has lost faith in himself, his music, and is plagued by regret and pain both physical and mental. You think of the humorous moments and jive talk as openings of the valve, so to speak – momentary and short-lived reprieves from turmoil.
There is this wonderful scene where Braden and Davis share some time together, coked out and drinking, when Miles finally opens up to provide material for the story Braden wants to write. But this comes with a price as well; Braden has to also open up about his own life. It’s a quid pro quo of manhood, two wildly dissimilar individuals suddenly linked in an intimate exchange. At this point it is revealed, during a brief boxing lesson that Davis gives Braden, that Braden himself is recently divorced.
Miles scoffs and says, as if aware of the allegorical subtext of his words, “Kinda messed up your groove a little, huh?” To which Braden wordlessly replies “yes”. The moment brings these two men closer, and the boxing session becomes a call to action. To “Get it back! Get it back!,” Miles demands while supporting the heavy bag and beckoning Braden to punch it, to let loose. “Get it back!!”
The groove, that is – of course.
The narrative switches gears a bit at this point, still keeping with free form and flashback piecing together of Miles’ fractured psyche, but the unlikely duo, obnoxious and overeager reporter paired with disgruntled, psychotically righteous artist, embark on a quest across town to track down a stolen music session tape from Davis’s home. They become near buddy cops in fashion, Tubbs and Crocket in demeanor and dress (a joke that very well might not be my own, but rather a subtle, deliberate reference by the filmmakers). Shoot outs and car chases ensue, it’s like you’re suddenly watching a different movie. And yet, you’re not. You suddenly remember that the world recently lost Prince, and that his death was overshadowed with the question of whether the music label he just beat in court had something to do with it. And so you go with it, watching Davis and Braden race through the streets in a tug of war with nefarious suites working for Columbia, yet another music label we need no convincing is capable of such loathsome levels of mischief to get over on an artist and at length objectify him, in the worst way; branding him a thoroughbred commodity. Used up, worse even – expired.
Though the film dramatizes the recording sessions of some of Davis’s best works, the script has a particular emphasis on Sketches of Spain, particularly, the track Solea.
Davis recorded Sketches of Spain between November 1959 and March 1960. It was hailed as one of his greatest works, called “a work of unparalleled grace and lyricism” by J.D. Considine in the 2004 Rolling Stones Album Guide, and won Davis and his composer Gil Evans the 1961 Grammy for Best Original Jazz composition. It is positioned as a centerpiece of the film and a high watermark of Davis’ life. 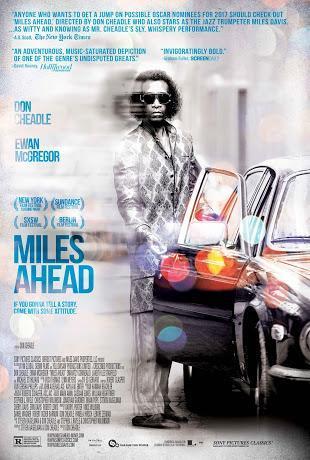 It is also essential to the painful flashbacks he experiences throughout the film’s runtime, flashbacks that tell the story of his love and loss of Francis. It is all both heartbreaking and inspiring at the same time.

And it bears mention that Davis didn’t get out of control with psychosis and drug addiction until after undergoing hip replacements and being inundated with painkillers. He suffered from Sickle cell anemia in addition to the multiple hip replacement surgeries that led up to him hiatus in 1975, but it’s interesting that the film juxtaposes this with his grief over Francis. It got me thinking early on, shortly after the first time Solea was mentioned. It got me thinking about that thing about Hemingway.
I consider Roberto Schaefer’s cinematography to have been a treat in this film, working well to encapsulate the free form narrative style. Worthy performances across the board from the cast. And on a budget of $344,582, the period locales and dress are understated and shortchanged by me calling them impressive. But there it is. Praise falling limp before that magnitude of its subject.
I look forward to more films directed by the Don.