Coming into my first year as a writer and learning of certain names and faces, actor, martial artist and stuntman R. Marcos Taylor was one of the first to stand out to me. He’s sizeable, standing well over six feet with a muscular, mildly stocky build, but his skillset equals him to many of the talent stunt performers and screenfighters I’ve written about, and I can attest to this having seen several of his works in addition to stunt and training reels. Point in fact, he was one of the people I put on blast for some work on the Jonathan Liebesman-directed Teenage Mutant Ninja Turtles remake, having tagged a bunch of people on social media – me, wet behind the ears with fandom and just eager to help people out.

About a year later I managed to snag a look at Tony Clomax’s shortfilm, Broken Angels, in which Taylor led along with actor Jeremy Sample, and since then, like with most of the stunt industry and many of its artists who prove themselves capable in screenfighting, Taylor continues to stand out as one of those people. It’s pretty rewarding, as much as I can imagine it is for Taylor as well, having coveted the role of controversial hip-hop producer Suge Knight in F. Gary Gray’s 2015 hit film, Straight Outta Compton, a role fitting for his height and physique overall, but one I also reckon not easily attainable by just any actor who merely looks the part. It speaks pretty highly of him and what he can do, and as a simple matter of time, it’s also pretty neat that he finally gets to stretch his muscles beyond smaller roles, and in a film that packs a few hearty punches and feel-good laughs.
Giving a go at The Martial Arts Kid helmer Michael Baumgarten’s latest action comedy, Paying Mr. McGetty, Taylor’s role welcomes a horde of cartoonish villany, notably led by characters such as Charlie The Goatee, an overly neurotic gangster and jealous boyfriend of Charlie’s daughter by the name of Rocco, and Rocco’s personal lackey, Vinnie. Our story, and the hilarity therein, begins when Tyrell, played by Taylor, wakes up in a hotel room with a mysterious woman whilst hungover from an evening of drinking and gambling. Prefaced, however, by what seems to have been just a platonic sleepover with said female, the otherwise harmless scenario is mistaken for a romantic tete-a-tete when a photo of the two circulates back to Rocco and his employer, Charlie, marking Tyrell as a target. Adding fuel to the fire is the twist behind the woman’s identity as all things slowly come full circle for Tyrell as he struggles to hold his strained relationship together with loyal girlfriend, Meena, while pondering his own future as an aspiring record producer.
The film isn’t far off from gracing action fans with our first selling appearance of martial arts action star, actor Don “The Dragon” Wilson in the role of Shota who dispatches his first poor victim in the bathroom. Between that and introducing Tyrell and actress Alissa Schneider and Anita Clay in the respective roles of Cecelia and Meena, Wilson carries the subplot build-up as he travels to his next assignment, having been hired by Charlie – portrayed by martial artist and film producer, Sifu Alan Goldberg – to go after Tyrell and teach him a lesson. The seasoned action star also bares the brunt of the film’s fights, coordinated by renowned author and stunt coordinator John Kreng, whereas Taylor’s emergence into the fight arena doesn’t take a truly serious turn until around the second half of the film following a spate of appearances by a nebulous martial arts Master and spiritual guide, played by martial arts instructor, innovator and scholar Oso Tayari Casel.
Some of the ne’er do well performances in several of the fights aren’t a huge standard setter for the film’s action as some of the hits don’t connect, with a few moments even strained a bit by what’s supposedly written as comedy. One example of this is a parking lot fight that takes place in the first half of the film wheren the choreography looks like it could have been tightened better for more solid delivery. A few other shots in the action scenes suffer from this as well, although it does have its more approving moments, especially in the second half where Shota takes on a trio of thugs working for Charlie the Goatee. It’s short, like most of the other scenes, but it’s also one of the more firm, energetic acton scenes of the film in addition to Taylor’s scene at a local store where he fends off two would-be robbers. The stunt work here definitely helps sell the action along with some helpful areas of editing when needed to help deliver the scenes where and when it counts.
Bordering somewhere between the comedy and the comical are the antagonists of the film, specifically with Goldberg as the big boss himself, Charlie, and actors Wade Williams and Jonathan D. Lee as Rocco and Vinnie, the latter two who obsessively chase our ill-gotten protagonist around Florida’s suburban back drop. There’s at least one scene where the Goatee himselrlf is shopping for fruits and veggies and ends up killing a tomato before yelling at two unsuspecting pigeons after an unfortunate phone conversation. Actress Forbes Riley stirs the pot even further at Tyrell’s boss, Mrs. R, putting our main character through the ringer for the following day as he works both his job and his routine back-and-forth at the recording studio, both while trying to evade Rocco and his goon squad, and the elusive Shota. 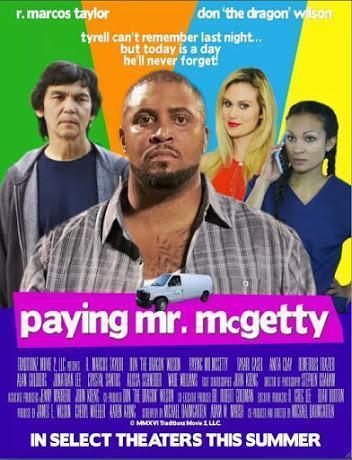 The crux of the film, after all matters of hijinks and fight action, is the story of an average joe schmo, overworked and underappreciated as he feels most times, working hard to make ends meet and keep his loving girlfriend in his life. Tyrell and Meena have a rocky relationship throughout the film, tried, tested, and nonetheless salvaged by one another despite the various influences at hand. At the risk of mildly spoiling the plot, what we have here is a healthy, relatable love story between two people who would do virtually anything for each other through the most impossible of circumstances, even if most of them tend to leave things uncertain. It’s a love story with its delivery founded on an unobvious subtext purported by a named character that we never meet or see on screen, invoking the titular concept of breadwinner’s endeavor.
Taylor’s was a fun, charasmatic role to observe. It’s a production light on scale at times and lackluster on script, acting and action for a few breaths throughout, for sure. In all instances here, we get a film that lends an ample intro to a growing and promising actor, and with a vehicle backed auspiciously by a community of longstanding prominence – Hall Of Famers like Wilson, Casel and Kreng and actresses Crystal Santos and Cynthia Rothrock (cameo), executive producer Dr. Robert Goldman, Urban Action Showcase & Expo host and co-star Demetrius Angelo, among others. For this, and from a critical view Paying Mr. Getty won’t leave you a hefty bill. More chiefly, the film is as perfect as any relationship.

RAILROAD TIGERS Whips Out Big Stunts And Classic Hero Theme Music In The New Trailer Live-Action NARUTO Is Back In The Headlines, Posing Some Major Questions That Need Answers!