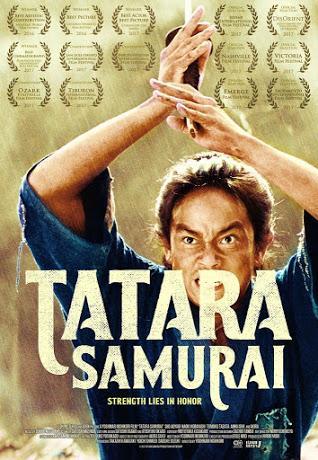 Aoyagi’s own performance doesn’t stretch really far in some instances while he does seem to illuminate in some scenes more palpably, and as equally needed in the few poignant moments he shares with Ishii. It’s exemplary of Nishikori’s handling of a film of this scale and sizes, offering a well-balanced period drama with a vast, epic scope that maintains its focus on character given the existential developments that accumulate along the way. You don’t immediately learn much from the subplot about how it all adds up, but you do get a sense of what is happening going into the second act. Actress Tabata Tomoko is instrumental here in the role of Okyo who appears seldom in the film, and mostly where it counts as the film seuges onward in its delivery in both compelling drama and cohesive storytelling.

For this reason, however, what might get lost in the narrative is the establishment of who is on who’s side if you’re not a history buff or you’re too immersed into Gosuke’s story. Other than that, what you’re left with by the end of the day is a film that does a lot of what it needs to with a serviceable script, gripping characters led by a modestly strong lead, beautiful scoring and set pieces that bring a refining sense and love of cinema that moviegoers can appreciate. Having garnered several awards and exclusive audiences at festivals and events around the world since late last year, it’s easy to see why Tatara Samurai is the artistic hit that it has come to be, and on the eve, no less, in just short of two weeks in Japan.
Eleven Arts is slated to follow suit with its own rollout of the film on June 2 in North America.