Review: THE TUNNEL (2016) Digs Into A Place In Humanity Where The Sun Rarely Shines 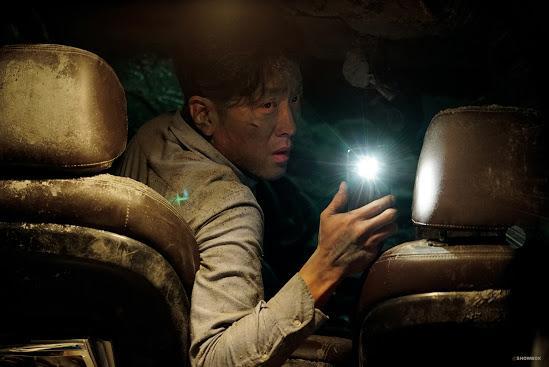 Kim Sung-Hoon surprised me last year when I finally got around to watching his most recent crime thriller, A Hard Day. It was a perfect introduction into his work for me and so that didn’t leave much to be concerned with in lieu of his latest movie, The Tunnel, which, according to Variety‘s most recent report, is still topping the Korean box office as of its second week. Author Sae Jo-Won’s 2013 novel serves as the inspiration for Kim’s own script which stands as way more than a mere underdog tale of one man’s survival against the elements. Most prolifically, it dares to cast an obligatory spotlight on some of the worst scenarios that could occur in any situation that stands similar in nature as lives hang in the balance.
One such life is that of Lee Jung-Soo, portrayed by actor Ha Jung-Woo, a car salesman on his way home in time for his daughter’s birthday. About six minutes into the film and not a moment later, the worst happens when the tunnel he enters completely collapses, trapping him and other motorists in a gargantuan pile of rock, iron, dirt and rubbish with no way in or out on either end. Rescue efforts commence as Lee struggles to make do with little what he has on him in food, water and battery life for his phone among other things. On hand on the outside is actor Oh Dal-Su in the role of Dae-Kyung who is among the first with the nation’s rescue units on the scene, while Lee’s wife Se-yun, played by actress Bae Doo-Na, wastes little to no time arriving there upon learning of her husband’s situation.
From there, the story immerses you into a myriad of highs and lows that flesh out our characters even more in their respective dimensions. Moments of mild levity and compassion, as well as those of pure repulsion and glutton, illumimate our characters – main and supplemental – amid the chaos that unfolds both inside and outside the pile of rubble that symbolize the core of humanity’s most definining moments. Such moments are iterated by a notable supporting cast which includes – and isn’t limited to, actress Nam Ji-Hyun in the role of Mina, and actor Jung Suk-Yong makes a worthy cameo as Choi, a valiant and charasmatic rescue team leader. Others include actor Yoo Seung-Mok who plays an overzealous news reporter, actress Kim Hae-Sook in the role of a government minister playing politics with the rest of her ilk, and a rambunctious pug who all but keeps Lee on his toes, even under hundreds and hundreds of feet of rubble.
The performances are relatively outstanding among the cast with Ha and Bae front and center, in addition to Oh whose role as Kim, much like Reginald Veljohnson was to actor Bruce Willis in Die Hard (1988), is the voice of reason for Lee who all but suffers near-limitless turmoil of never knowing if he’d live or die. Rescue efforts prove to be long and winded, and with a plot twist that ultimately sees things turn for the worse, forcing Se-Hyun to bear the brunt of the grievance of those who’ve died trying to rescue her husband – something that speaks to the often flawed and irrational tran of thought one goes through with anger, in my opinion. It certainally affected me the most while I watched the film and observed this, on top of other disturbing proclivities our main characters are subject to throughout the unfolding drama. 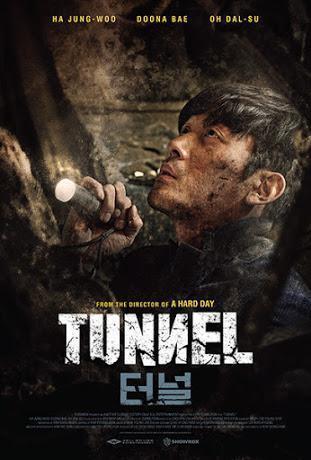 Indeed, The Tunnel was one of the most compelling (and sometimes gutting) films I’ve seen. It grips you in some ways you least expect while making the most out of its actors, using its perilous moments as the inertia it needs, and not as “characters” themselves as other directors may try to, which feels pretentious to a certain degree depending on the film. With Ha, Bae and Oh anchoring this fine dramatic venture, the film is also very much a mark of continued sharpness and career progress from a filmmaker I wish I paid attention to a year sooner. If there is one thing Kim knows how to do at the director’s chair, it is tell great stories that focus on people more than spectacle, and flesh out the best of what they can offer in the moments scenes call for in a film, and The Tunnel, much to his credit, is no exception.

Click here to learn more about the film’s August 26 release in select theaters this Friday from Well Go USA.

Watch The First Official Trailer For Rising Tiger Films Premiere Feature, BLACK SCAR BLUES WB/DCEU's JUSTICE LEAGUE DARK Lands The Director Of The GAMBIT Movie He Is No Longer Directing. Or Whatever.