Review: Way More Than Its Accolades, MOONLIGHT Is A Call To Human Decency

Moonlight is not only a film with several impressive accolades, it is one bearing those with a unique signature. Indeed, Moonlight is a gathering of firsts; At the 89th Academy Awards, Moonlight was the first of its kind to win the Best Picture Award, with Mahershala Ali, winning Best Supporting Actor and ultimately becoming the first Muslim to win in the designation. The editing team, leader Joi McMilion and co Nat Sanders, were the first black woman and black man, respectively, to be nominated for an editing Oscar. Moonlight was also the first LGBT film to win an Academy Award for Best Picture, as well as the first all black cast to take home that honor. Such is its relevance, this film, that it be a trailblazer.
The film introduces us to Juan first, a Cuban drug dealer in Liberty City, Miami. This is Mahershala Ali with a tentative swagger and an ever inquisitive expression. He chances upon a young boy, Chiron, being chased by bullies in the street. Chiron holes himself up in an empty crack house to hide. We see the terror and hopelessness in Chiron, in a corner in the darkness, trapped in the world and in his body. At once you know this muted scene – muted, that is, in the moments after the bullies get tired of throwing rocks at the window – will set a tone for the movie.
Juan comes along to introduce himself and offer the boy lunch. It’s that inquisitive air that Ali brings, it makes these moments so interesting in their quiet development. I suspect it’s this that won him his Oscar, and in retrospect made him fated for one. It’s an air that he brings to several of his roles. Notably, as Cottonmouth in Netflix’s Luke Cage; there is always the suggestion of a much deeper story being told in the way that he carries himself, the fastidiousness of his movements. If it can be argued that there is music in the way people are, then Mahershala Ali, as an actor, is an incarnation of Miles Davis’ trumpet.

Chiron, he doesn’t speak. He can speak, but it’s clear right away that his diffidence is not just a result of being shaken up over the bullying, but rather a sign of something deeper that troubles him. Juan is sensitive to the trouble in the boy, laughs to reassure him. Is patient. We suspect that this is the blossoming of a mentor/student pairing, a look at how boys and men find each other in a walls-open classroom for manhood’s examination.

A nod to the writing, Barry Jenkins’ script sets up the story as a three part chronicle of Chiron’s life; boyhood, teen years, and at last a man. The kind of man he becomes, and as we watch him becoming it, it all coheres in a thunderstorm of pathos. The three actors who play Chiron (Alex Hibbert, “Little”; Ashton Sanders as Chiron during his teen years, and Travante Rhodes as the grown up Chiron) all bring their own flavor of gravitas, and they fit as representative of this particular character’s evolution.
To call Chiron an important reification of au courant African American youth understates it; indeed, as an LGBT face in an award winning film, it lands as a topical voice lent to the conversation. I live around the block from the shooting that happened last year in the Orlando Pulse nightclub, and I remember a lot of questionable responses from many of my contemporaries in the black community. These weren’t the voices of a people sensitive to the dehumanization of innocents via fear, certainly not while currently in a battle directly with the police for quality of life – for life at all! These were people oblivious to their own hypocrisy, blinded by prejudice and culturally constructed hate.
In the film, all this is very well depicted in the bullying. 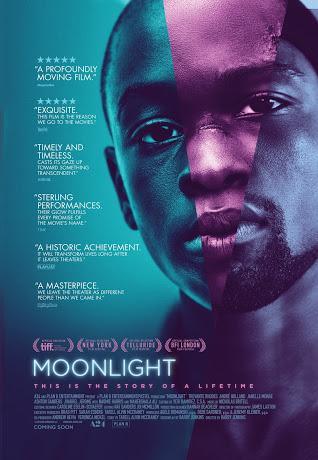 There are muted scenes of grief scattered throughout the film that mirror the disposition of Chiron, a thing that suggests that Chiron’s quiet observance of life is an obloquy of it, his surroundings, the people of the world that would have him grow in their image. Going back to the film’s first section, called “Little”, we meet all the principal characters. We’ve discussed Chiron and Juan’s relationship, but it bears mention that it is Juan’s girlfriend, Theresa (portrayed by the lovely Janelle Monáe) who truly breaks open the barrier Chiron keeps perpetually around himself, creating space for them (and us) to get to know him. This happens after the early scene when Juan brings Chiron to get food, but still the boy doesn’t talk. Juan brings him home with him, having nothing else to do with a boy who refuses his name and even where he lives, where Theresa swoops in with maternal instinct, nurturing in her caritas and patience.

Monáe, her claim to fame being in the field of music, lacks an extensive filmography. But she was Mary Jackson last year in Hidden Figures, and here she brings the same sort of modest piquancy to her role that makes up for what she’s missing in experience. A point about her beauty, it’s near angelic in the purest sense. I suspect that it’s deliberate that, though her character remains in Chiron’s life for the duration, we aren’t allowed to see her age. She is featured in the first two sections, but only heavily referenced in the last act. This stood out for me, and I’m convinced it was a narrative choice; to give her a deific quality. Whether it was a choice made after Monae’s casting though is a speculation for another discussion.
Naomi Harris is Paula, Chiron’s mother. We do get to see her age, and by far south of gracefully. I hated this character, a testament to Harris’ talent, but I grew to empathize with her as the reality of her failure as a mother hits her later in life. It is deeply human, and painful to behold. This despite her culpability. When we meet the character, she at first appears a frustrated though hard working mother. She is seen wearing a nursing outfit, for instance. But it is soon realized she is a primary source of emotional abuse for Chiron. She’s also a junkie, her habit supplied by Juan’s own operation.
There is a pivotal scene towards the end of the first act when Juan confronts Paula for her disgrace as a parent only for her to turn and rebuke him for being the dude selling her the junk in the first place. It’s that kind of film, filled to the brim with pathos and context. A watermark, for its professional success and critical reception, in the slow-moving change in a Hollywood -and zeitgeist- preparing to engage these conversations about identity, sexuality, and where the buck stops on human decency.
See this film for its refusal to turn away from the festering carcass of prejudice and bigotry. See it for its bravery in engaging the topic with an opera of black faces. And then see it again with a friend, preferably one has had something dismissive to say in the past about the persecution of gay people and the civil rights battle they are currently fighting.
Written by Khalil Barnett (khalil_barnett@yahoo.com)