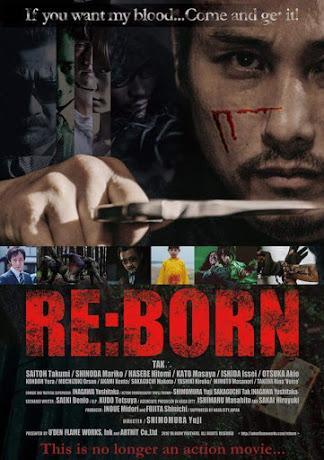 Actor Sakaguchi Tak’s exit from (or re-entry into) film has been a hard one to pin-point. Though the actor himself has previously pointed out finishing his cult celebrity status with his latest starring role in Re:Born, some are discussing it as his “return”. It’s not exactly something I would argue against either. I’ve been a fan of Sakaguchi since college when he was just a budding young badass in a pair of early performances, including Yamaguchi Yudai’s Battlefield Baseball and Kitamura Ryuhei’s Versus.

Needless to say though and as far as I’m concerned, Sakaguchi’s career trajectory remains uncertain, especially in the wake of his latest action-packed effort, Re:Born which just hit screens at Bucheon and is now readying a star-studded event screening on September 18 in Japan. Sakaguchi reunites with longtime friend, stuntman and prolific stunt coordinator Shimomura Yuji in this, their second pairing since Shimomura’s 2006 directorial debut, Death Trance.
A production of Japanese stunt and film companies, Worsal and Shimomura’s U’den Flame Works, the film sees Sakaguchi in the role of Toshiro, a small town store clerk whose stoic, albeit easing lifestyle in the Ishikawa prefecture away from his violent past comes to a violent halt when a spate of gruesome murder at the hands of Phantom, his demented former special ops commander, forces Toshiro back into the wilderness to dispense justice. Actress Kondo Yura makes her own screen debut as Sachi, the young girl Toshiro befriends prior to getting swept into the imminent danger that looms. Actresses Shinoda Mariko and Hasebe Hitomi, and actors Ishida Issei, Saitoh Takumi, Kato Masaya and Otsuka Akio also star.
An official theatrical date in Japan cinemas is still pending while the first official teaser is already live as of last December, in addition to a small raft of behind-the-scenes featurettes highlighting the film in its development, including fight choreography and inception with CQC professor and advisor Inagawa Yoshitaka. All these and more can be viewed at the official website including more details about the film, and up to nearly six times more photos from the movie of which you can now sample a gathering of fifteen in the album below.

Watch The Teaser For EXILE Gangster Saga Sequel, HiGH&LOW: The Red Rain Pang's MY WAR Wages On With A New Trailer