Screener Review: THE BEAUTIFUL ONES (2016) 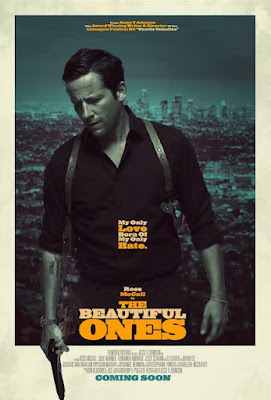 Coming into writer and director Jesse V. Johnson‘s latest movie, The Beautiful Ones, the earlier trailers hinted at something quite artful and unique in a way. If you don’t necessarily have an eye for filmlore of yesteryear in some capacity, you might either disagree with this particular film or be entirely indifferent; My film background is a mix comprised mostly of films from the last three decades, so my exposure to movies before that leaves a lot to be desired if not for only a select few titles, filmmakers and stars. However, it’s a history that well suits Johnson for this latest beaut, and much to our delight.

Billed as a modern day noir Romeo & Juliet, the movie is set in Los Angeles and centers on Gabriel Tancredi (Ross McCall), an enforcer for the Tancredi crime family under his aunt, Madame boss Caterina Tancredi (Julie Warner). Their distinct history shared with that of the Romano crime family led by Tony “The Shark” Romano (Anthony V. Pugliese III) has since led to a turf war between both sides, and at Caterina’s behest, Gabriel moves in to infiltrate Tony’s daughter, Eva (Fernanda Andrade), for leverage. As the story here goes, with the two families itching to pull triggers to see how many bodies will drop before the war is won, Gabriel finds himself falling in love with Eva, and must now come to terms with the family he bled for, and the life he wants away from it all.
Johnson‘s script and the overall production design do wonders for the film’s adherance to 60’s and 70’s-era filmmaking with strong cinematography and great set pieces, music and costume design, and a tone that doesn’t bore you until the action sequences begin. McCall’s performance as Gabriel is one that commands with a lifestyle and a sense of coolness and swagger attributed to his character’s favorite actor, Steve McQueen, in addition to a nuanced understanding of religious theology and an appreciation for Nippon crime classics. As a result, none of McCall‘s performance is overdone or misinterpreted in any way with solid acting and a workable approach to a cinematic image not retooled or rehashed, but echoed and otherwise respected.

The film’s supporting cast contribute favorably here as well with brief appearances by actor Eric Roberts and actress Jessy Schram to name a few. Leading actress Andrade graces the screen with her presence in the role of Eva, and, like McCall, portrays her character maturely and genuinely, making the Gabriel and Eva story all the more watchable as time passes while the compelling details and ensuing conflict unfold.
The film is peppered with some truly engaging moments of intertwining drama that highlight Gabriel’s relationships and withering friendships, as well as his past with respect to his employment under Caterina. Actor Brian Tee plays the hugely intergral role of Casper, the driving force behind much of the friction that lingers with Gabriel and the Tancredis’. Warner, as Caterina, lends a performance that builds off of its thematic environment enough to give a multi-dimensional understanding of what makes her tick, whilst briefly joined in one particular scene featuring a memorable final performance from late actor Ed Lauter as the disenfranchised and nostalgic father and former figurehead of the Tancredis’.
The film isn’t loaded with action, but that isn’t something to second-guess with Johnson as the director with up to twenty-five years of stunts and action on film under his belt. Tweaked and nurtured with pristine focus in the good company of action coordinator Luke LaFontaine, the action sequences take you right into the blunt-force trauma with every swing, stab and jerk of a trigger. The explosive finale, ornamented by an array of guns big and small, and a punishing knife fight to boot are stylishly coordinated and delivered with impressive camera positions and angles that do McCall justice as an action star, while servicing just the right dose of quality action rarely seen on film anymore.

If you’re a millenial reading this review and don’t necessarily have the experience most people like Johnson have in filmlore, you might be forgiven for not entirely understanding all or even some of the tropes seen here. Thankfully, the film isn’t difficult at all to watch and composes itself rightly so, with great pacing between scenes and character delivery and all the transitions therein, served piping-hot with a definitive male lead that conveys just the kind of hero the movie needed to work.
Alas, Johnson and his cast and crew present a crime thriller that not only welcomes all who are interested, but serves an homage to a standard of artistic interpretation representative of an era that still burns inspiration into some filmmakers today. In all its gorgeously-shot and bullet-ridden glory, we get a movie that reminds audiences of what going to the movies ought to feel like, as opposed to reimagining it.
In that respect, there is plenty to love and appreciate about the The Beautiful Ones in all its gorgeously-shot and bullet-ridden glory. Because there is nothing deceiving about these looks.
Stay tuned for news on its release!

More Action, Mystery, And Monica Bellucci In The New Extended TV Spot For SPECTRE! Ryoo Seung-Wan's VETERAN Takes Its Chase To The Streets In The New Teaser