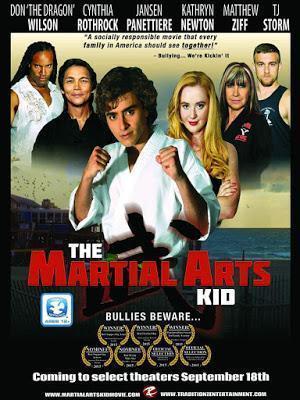 The martial arts genre can be a thrilling one when it comes to movies. However, spectacle aside, every now and then it helps to get grounded a little more in what the overall practice of it really means, and we’ve seen that narrative several times in the past through different tones. This time, we get martial arts stars Don “The Dragon” Wilson and Cynthia Rothrock as they spearhead this newest effort in director Michael Baumgarten’s new movie, The Martial Arts Kid.

Actor Jansen Panetierre stars in the title role of Robbie, a new face in a small Florida town where he goes to live with his Uncle Glen and Aunt Cindy, played respectively by Wilson and Rothrock. Robbie’s prior stints with the law have forced his grandmother’s hand, leaving his fate in the hands of his extended family while he struggles to balance teenage life and his own inner turmmoil. He meets Rina (Kathryn Newtown) however, and that effort soon turns on its head when he incidentally crosses paths with her muscle-bound boyfriend, Bo (Matthew Ziff).
Robbie takes it one day at a time while Bo sets the standard from time to time with the usual semantics. Beyond that, things eventually start to get a little easier for him when he acquaints himself with Glen’s martial arts school, all while getting a new job, a bike and the sustenance of Rina’s friendship. Unfortunately, when things start to bloom between the two, all hell breaks loose in an instant as Bo’s actions soon trigger Robbie to let loose on his crowd, ultimately catching the attention of his siblings, as well as Bo’s own school led by Kane (T.J. Storm), and ensuing an all-or-nothing confrontation.
Getting things started a bit in the first act, the story moves a little too fast but still lends ample time and depth through dialogue to help introduce our characters. We eventually meet Robbie’s cousin, Katie (Kayley Stallings) who contributes plenty to the film’s charm and chuckles upon their unceremonial reunion at the top of the film and in scenes thereafter. The film wastes little time before we meet Rothrock and Wilson and it’s from there that several key moments between Wilson and Panetierre further set the tone for Robbie’s own growth. Panetierre plays the part staunchly well in the title role of this films through his training, his relationships with the sibs, and the film’s central subplot focusing on his blooming friendship and romance with Rina.
Ziff doesn’t get a lot of screentime while he tends to appear in the background in the second act, but he plays the Bo character right to a T in the scenes that matter the most. This, coupled with our entry into Storm’s role as Kane where we learn plenty about his motivations as Bo’s antagonistic martial arts teacher and Glen’s polar opposite, makes for a great formula in establishing the dichotomy that sits on both sides of the ideological martial arts coin.
Make no mistake about the action here either as the film leaves plenty of room for the genre to shine for fans. Between the fights and the training, these scenes are peppered with delightful moments of watching Wilson and Rothrock at work, especially Rothrock as she effortlessly split-streches her leg up a pole with nothing short of ease.
The martial arts underdog genre is a great way to present a number of teachable moments and lessons for a family forum. Such is The Martial Arts Kid, a film foundated on its primary anti-bullying message and it’s the kind of tool that makes this particular subgenre timeless and ageless, and with special regard to the final fight between Wilson and Storm, and the overall subtext behind the film’s title.
From a technical aspect, the only things that really stands out are plot holes that occur in just a few parts of the film. Other than that, the film was fun, funny, poignant and very enjoyable with a lot of heart and resolve, with exception to the cliffhanger ending, and that’s all I’ll leave there in that respect.
The Martial Arts Kid is a truly fitting family drama as much as it is a love letter to the martial arts genre, and even martial arts as a whole. Wilson and Rothrock, who come from an era of 80’s and 90’s action films that remain popular among the niche, don’t miss a beat in this one alongside a great cast and a lead actor who could very well be an action star in the making if he so chooses, and at the center of it all, a message that benefits anyone and everyone and never gets old.
Be sure to stay tuned to the official Facebook fanpage with links to the official website for The Martial Arts Kid, and keep your eyes open for more information in lieu of its forthcoming wide release.

THE GREY MAN May Have Found Its Leading Lady In Charlize Theron Taron Egerton Lines Up KINGSMAN 2 Shoot Followed By ROBIN HOOD: ORIGINS Next Year