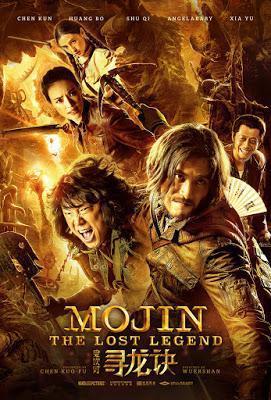 It’s been somewhat of a season of “firsts” for me here and there, and such is the case with director Wuershan‘s newest film, Mojin: The Lost Legend. I don’t exactly know what the effect would have been if the production company simply left its original title, “The Ghouls”, although the new title makes sense and gives meaning to the story as it unfolds.

The film focuses thematically on an age-old clandestine group of tomb raiders who once existed for the purpose of dig for treasure in order to feed China’s poor during wartime. Based on Zhang Muye’s novel “Ghost Blows Out The Light”, actor Chen Kun plays a discouraged former member of said group, the Mojin, alongside Huang Bo as they struggle to hustle on the streets of 1980’s New York. The story takes an intriguing turn when a mysterious image of an enchanted stone, the Equinox Flower, reappears, fanning the flames once more for our characters, with the help of an American archeologist played by actress Shu Qi, to trek back to Inner Mongolia twenty years after a tragic incident redefined the course of their lives. However when the mining company turns out to have a much more nefarious purpose than it appears and a curse is unleashed in the very cave they enter, personal greed, bitter memories and moral quandries will ultimately determine if the treasured Flower will be worth unearthing in exchange for their lives.
I watched a slightly rough-around-the-edges screener but it was ample enough in presenting Wuershan’s vision of what he wants audiences to see when the film opens in China and the U.S. on December 18. The film wastes little time showcasing its ambitious visual cope, illustrating what it’s like being a wartime Robin Hood, dodging an arsenal of booby traps and many of the adventurous and thrilling things that come with being a Mojin. The special effects are a mix of good and bad, but worked in a lot of places where it counted, which is more than I can say for much of the comedy the film tries to evoke from at least one supporting character.

Most of the acting was good and the action sequences were fun to watch, full of intense and exciting moments and sometimes great CGI. Chen Kun and Shu Qi share a largely tense and awkward pseudo-romance as Hu Bayi and Shirley, a subplot that thankfully doesn’t fall on its face. It’s one of the several story elements that work well in the script in addition to Qi‘s acting which lends its fair share of charm and purpose, making use of her role just nicely on top of her physicality in the zombie fighting scenes next to Kun.
Huang Bo plays Wang, one of the film’s two primary comedy angles next to actor Xia Yu who plays Big Gold Tooth. Both are more slightly savvy on hustling and making money but still share specific differences between each other that make them a rather odd, yet interesting pair. Angelababy appears in several of the film’s key sequences that explore the impetus for much of the drama that unfolds between Hu and Wang and how Shirley fits into it all. Xiaoqing Liu plays a mysterious cult leader who doesn’t have much to do other than play her part as the key antagonist, and while she doesn’t have much to do, she and supporting axe-wielding villainess, actress Cherry Ngan are still able to make their roles work much more than some the over-the-top villains next to them.
Mojin: The Lost Legend is a fun adventure film full of intertwining drama and timeless fantasy. It has an underlying subtext often taps into messages of transcendence and forgiveness that bode beautifully for the overall character development, and does so with characters that are relatable and often funny. To that end though, much of the formula that plays out through some of the more poignant and serious moments of the film tend to get overwritten a lot of the time by what is sorely mistaken for supporting comedy. Instead of what should be some of the more grounded and heartfelt mood when it rises, you get lots of excess that almost damages the film which ultimately saves itself through its much more prominent strengths, including several of the principal cast.
If you’re the kind who loves a good exotic and haunting action adventure film like The Mummy and Indiana Jones franchises, you’ll be delighted by many of the jewels Mojin: The Lost Legend has to offer. It leaves a bit to be desired in quite a few areas, but if you can still manages to deliver a showcase an amazing cinematic feat with notable performances, plenty of ghoulish and colorful spectacle, and enough emotional depth to hold a candle to.
Personally, I’d hold a candle for Shu Qi any day. But that’s just me.

People Get Called The H-word And Stuff In The Violent New NSFW Trailer For THE NICE GUYS! CROUCHING TIGER, HIDDEN DRAGON: SWORD OF DESTINY Wields A Trailer Tease!