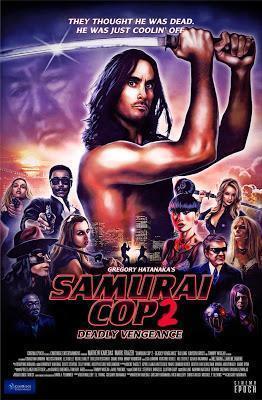 Considering I’m in my thirties as I wrote this, I suppose the late director Amir Shervan’s 1991 flop, Samurai Cop was something that I should already have seen by now. Well, I haven’t. Point in fact I had only seen it in December of late 2015, and long after the hype train took off stemmimg from the imminent fascination surrounding actor Mathew Karedas’s re-emergence from obscurity a few years ago.

Thus, we are now brought full-circle through Cinema Epoch’s revival of the original film in its current cult-classic status to forsee the delightful arrival of director Gregory Hatanaka’s latest, Samurai Cop 2: Deadly Vengeance. Kareada, formerly Matt Hannon, returns to the fray as our title character in a story set between the timeframes of both films 25 years apart. Following the events of the first film, tragedy strikes our hero, Joe Marshall, while a corporate war among rival Yakuza gangs brew in the city with bodies piling up. Actor Mark Frazer reappears as detective Frank Washington left to pick up the brunt of detective work abandoned by his former partner who has since disappeared afte said tragedy forces him into into a life of solitude from society with a newfound sense of self.
The film is lined up with an array of fun characters, including several from the original; actor Cranston Komura returns in a later iteration of his former character, Fujiyama, along with a bevy of film thesps including a cameos by Gerald Okamura and Joselito Rescobar, and performances Tommy Wiseau (The Room), Mel Novak (Game Of Death) to name a few. Melissa Moore is back in the role of Peggy, along with adult entertainers Lexi Belle and Kayden Kross, scream queens Laurene Landon and Mindy Robinson, and actrees Bai Ling who hams it up fiercely and plentifully in her moments as one of the main villains.
Of course, a cast like this invites just a few expectations that leave little to the imagination with exception of only a smidget or two of surprises. Compared to Shervan’s film, Hatanaka does little to abstain from many of the elements made the classic so great; Karedas lends a mildly convincing with a performance Frazer’s with characters that both share a sense of newfound importance in a reunion otherwise contrived by the usual gratuitous violence and cheese that sets it all up. More intense moments of the film are promptly over and under-acted much like the first, coupled with a handful of flawed editing, helpful servings of softcore porn and full frontal nudity to assist wandering eyes among viewers, entertaining action scenes courtesy of choreographer Kevin Barile and stunt coordinator Mario Rocha, and set pieces and scenes bearing all the tropes of a proper low-budget flick full of cheese and D-movie wonderment.
To that effect, Kross herself deems something workable as an actress in her own right and it’s something she can use to her advantage if she pursues it a little more beyond this point, and she’s not alone here. That said, there’s something to be said about a film that’s horribly made on purpose as opposed to its predecessor – Not that I know if whether or not this was the case for the first film, but indeed it has the reputation that it has now for a reason (you don’t get labelled “the best WORST film ever made” for nothing), and aside from those in the know, people can judge for themselves if Shervan’s goal really was to parody himself and make a crummy film, though I wholly deny the result would have been unbeknownst to him if it was the other way around.
Thus, what you get with Samurai Cop 2: Deadly Vengeance is exactly that: A crummy film, made on AND with purpose in a film market that remains keen on nostalgia-based properties, and for hardcore movie fans and cult followers of ressurected film lore, this is a terrific thing. The film glistens on its own with a more distinct and edgier feel toward something slightly more serious from time to time right before going back to mediocre and ridiculous. You also get tons of comical acting, action sequences that glare with violence and gore in a few spots, plenty of skin, ninjas, a soundtrack that leaves no room for discretion and more – all with the production quality of made-for-TV movie that you will never see on regular local programming.
Above all else here, there’s no question that Hatanaka set out to achieve exactly everything said here. The film’s flaws speak highly of its tonal continuity from the first film which now rests in movie history as a milestone example of how to win by failing epically, making Samurai Cop 2: Deadly Vengeance a winner by default in almost any film buff’s book. Anything decent and top-tier would have been a disaster.
Keep this one nice and warm until its DVD and Blu-Ray release on February 2016, and follow Samurai Cop 2: Deadly Vengeance on Facebook. 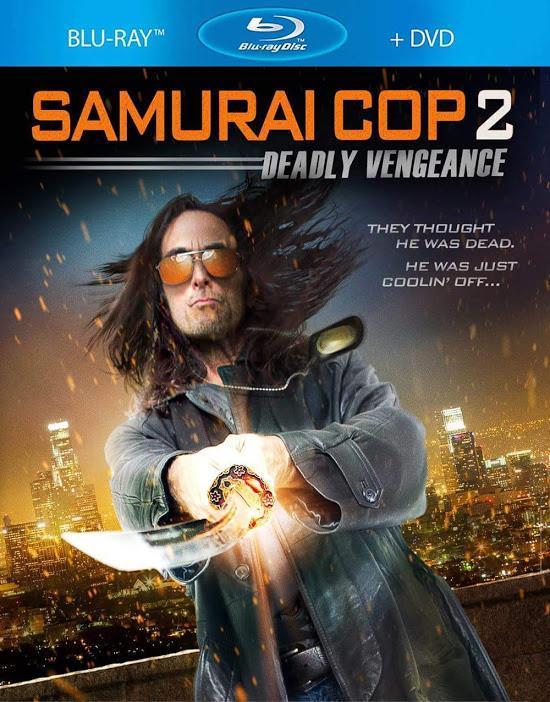