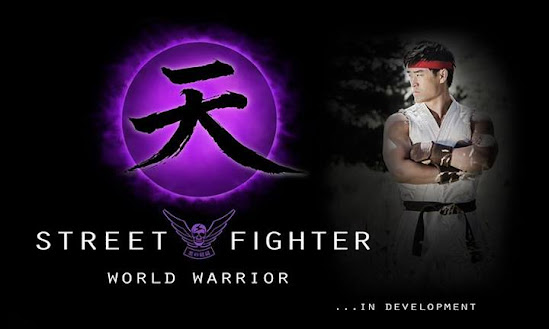 For starters, to simply address the overwhelming support drawn for creative duo, actors Joey Ansah and Christian Howard‘s new online webseries release of Street Fighter: Assassin’s Fist would be nothing short of an understatement. The phenomenon has captured the hearts of any growing number of thousands of fans this year and in the years since the journey began to reclaim the rightful cinematic vision for Capcom’s highly popular video game franchise, and it’s finally heading to television, DVD, Blu-Ray and VoD platforms soon. And as much support as there has been for the series, it was only a matter of time before sequel-hungry fans got the update they were waiting for.

That update finally came on Friday night as Ansah attended San Diego Comic-Con to promote the current series in accordance with publicity for the forthcoming production booklet. Fans have also been generating further publicity for the series’ official Facebook platform offering questions for the page’s weekly episodic Q and A forum for fans as the summer progresses, while Ansah and select cast and crew, namely series actors Mike Moh and Gaku Space join him on the road.
Needless to say, many of the any questions pertained to when Street Fighter: Assassin’s Fist would move its initial story forward with a second season. On Friday night, Capcom gave fans the annoncement they needed, with reports from Variety confirming season two development. Set to release sometime in late 2015 or early 2016, Street Fighter: World Warrior will re-introduce Moh and Howard respectively as Ryu and Ken, the iconic purveyors of Ansatsuken – the style passed on to them in the previous season by master Goken, played by actor Akira Koieyama.
Following the events of Street Fighter: Assassin’s Fist, Ansah is returning to write and direct the new season which will expand the story which Ansah explained during a panel at SDCC on Friday. “The scale of ‘World Warrior’ is much larger, picking up where ‘Assassin’s Fist’ left off as we follow Ryu and Ken on their ‘Musha Shugyo’ (warrior’s pilgrimage),” said Ansah, who also starred as Akuma in the first season. “The Shadaloo criminal cartel will be introduced, led by the extremely dangerous M.Bison, which will naturally lead into the World Warrior tournament,”.

Accordingly, the new series will expand to the stories will  characters from the classic game franchise, namely prominent Muay Thai fighter, Sagat, U.S. Air Force Major Guile, and expert martial artist and vengeful interpol agent Chun-Li. Further developments are needed on how the new season will achieve its goal, but producer Jacqueline Quella and co-producer Mark Wooding offered a few statements of their own at the SDCC panel. “We demonstrated with ‘Assassin’s Fist’ that an authentic, live-action version of videogames, with a compelling and dramatic storyline, can be made,” said Quella. “We’ll be taking the same approach with the new series.”. Wooding added “There are some big and primal themes which we’ll be exploring in the sequel, …It will be thrilling and naturally, as befits the game, the fights will be epic, but it will be driven by the characters, their stories, faults and problems. It will be a dark tale.”.

The first season took relatively around three years to take off after Ansah and fellow filmmaker Owen Trevor broke ground with the 2010 release of the conceptual shortfilm hit, Street Fighter Legacy. The project took a big step forward with further Comic-Con announcements in 2012 through a crowdsourcing effort in early 2013 before earning the blessing of outside investors, essentially setting the first season in stone.
Sixteen months, a full first season with over sixteen million YouTube views on Machinima and over five-hundred thousand Facebook fans later, the franchise that became a household name for generations of gaming culture is well on its way to coming full circle. More notably, if earlier hype proves positive, martial arts action fans could very well see the reunion of Ansah and Howard with action star and Green Street 3 lead actor, Scott Adkins as a potential casting choice for Guile. And considering the formula by which the casting, design and creative process has been executed, Adkins’ possible addition to the series would be a remarkable sign of the extra serious talent fans will see when the team behind Street Fighter: World Warrior commenses filming. And Capcom’s blessing only enhances the awesome here much further.
“We are delighted to be working again with the team that did such an excellent job with ‘Street Fighter: Assassins Fist,” said Matt Dahlgren, associate director of brand marketing at Capcom. “The response to it has been amazing, and working with filmmakers who are so passionate about the game is an extremely rewarding process.”

The big question now is will the production be able to confirm Adkins, granted he will be available between his other film and martial arts instructional obligations? Or will another worthy actor be summoned to channel the Major’s sonic boom? Also, which actors and actress do you believe will best suit the appearances of Chun-Li, Sagat and the arbiter of the Psycho Crusher himself, M. Bison?
Decisions, decisions!
City On Fire reports that Street Fighter: Assassin’s Fist arrives on North American DVD and Blu-Ray from FUNimation on October 24, 2014.
Stay tuned for more info!