SENSE8 Finale Trailer: This Is War! 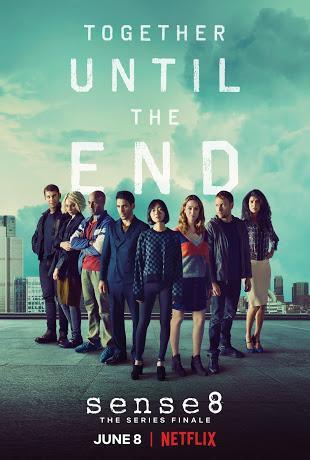 There isn’t enough I could say that could culminate how much I appreciate the work and effort, and the unifying energy and creativity that engulfs a show like Netflix series hit, Sense8. It took me completely by surprise just as its second season went underway and I proudly and shamelessly binged the fuck out of both seasons whilst finding out toward the end of the second that Netflix was cancelling the show because of bullshit reasons or whatever.
If you’re not at all knowing of what this show entails, you’ve only let yourself down as its one of the best shows a fanbase could ever live on and fight for, set in a global tale where clusters of eight psychically linked and unique people of eight – the procurred result of scientific discovery and corporate skullduggery – and where our heroic octet finds itself banding together in a fateful battle against evil forces that want them dead.
…So that’s pretty much the gist of it, although the show itself has grown to be much more than the sum of its parts. The indomitable spirit and identity this show has taken on through its observation of love, acceptance and unity is exactly what has spoken to the fans, and myself included, so much so that a mere two-hour finale still doesn’t feel like it will be enough.
That being said, I can only trust that the Wachowski sisters were able to deliver on this and observe for myself on June 8. As much fun as the show has been, I think they just might pull it off, and while we’re at it, it’s nice to see the character of Kala’s husband, Rajan, all caught up, abrupt and whatnot.
Fun times!
The official trailer is here, so check it out now!

Jackie Chan’s BLEEDING STEEL Crosses Over To The U.S. On July 6! PIMPKILLAH: Indie Comic Book And Film Auteur Sarah Bitely On The Evolution Of An Amazing Idea