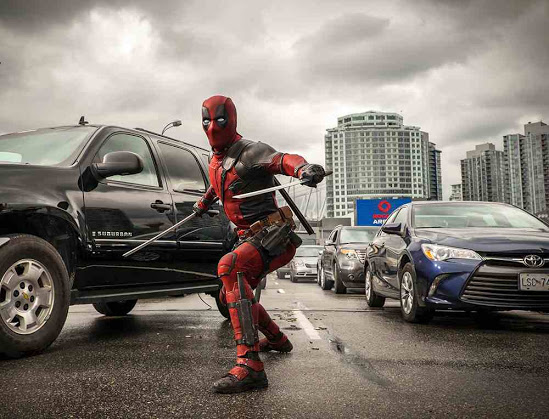 Following the riproaring thunderstorm of residual uber-excitement stemming from reactions toward the epic Comic-Con trailer for Batman V. Superman: Dawn Of Justice in July, and with the exception of the stellar reception drawn from Warner Bros.’s Suicide Squad, it became quite clear that topping these would not be an easy feat. And then came Colossus, Negasonic Teenage Warhead, swords, brown pants, vehicular manslaughter and frontman Ryan Renyolds solidly in his element as the titular “merc with a mouth” in what can easily be deemed as the next level in Marvel superhero movie fandom.
I speak of the latest official trailer for director Tim Miller’s long-awaited comic book adaptation, Deadpool, based on a character created by Rob Liefield and well into a decade in the works for the big screen, and it’s easy to understand the delight and resolve being felt in the air right now. Years of worry over a PG-13 rating have nearly disuaded the fanbase from even supporting the movie in that state, and it took the power of the internet to stop that from happening, and gladly all that has changed in due time.

Based upon Marvel Comics’ most unconventional anti-hero, DEADPOOL tells the origin story of former Special Forces operative turned mercenary Wade Wilson, who after being subjected to a rogue experiment that leaves him with accelerated healing powers, adopts the alter ego Deadpool. Armed with his new abilities and a dark, twisted sense of humor, Deadpool hunts down the man who nearly destroyed his life.

Actresses Morena Baccarin, Gina Carano and Brianna Hildebrand, and actors Ed Skrein and T.J. Miller round out the cast woth a script by Rhett Reese and Paul Wernick, and fight and stunt coordination by Netflix series Daredevil action choreographer Philip J. Silvera.
It’s also worth noting that Renyolds won’t be taking on another superhero property after this with the exception of a hopeful Deadpool sequel or a possible addition to the studio’s currently-developing X-Force movie. So, yes – this is one to appreciate, and no less, support. February 12, 2016 is the date, bitches, so bring friends.
Watch the brand new red-band trailer below, and expect the trailer to play in front of Fantastic Four in theaters this weekend!