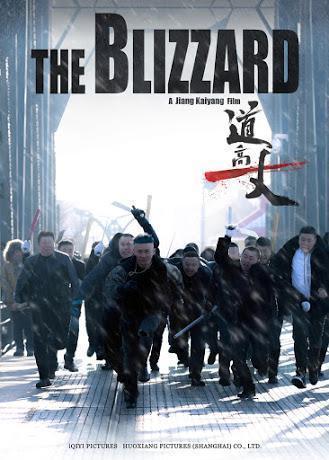 It was last summer during the Busan International Film Festival that Beijing-based online platform, IQIYI, launched international sales on three in-house productions. Writer and director Jang Kaiyang’s The Blizzard sat as one of all three prospects and at one point was slated for a 2017 release, although nowadays that seems to be changing with a 2018 rollout in tow instead, at least judging by the latest local trailer online.

Liu Haiyang witnessed his best fellow at Police College, Song Chao, escaping away while his father is dying in the blood. Considered as the murderer, Song absconded from Harbin to Hainan. Three years later, Liu and Song come across with gun and bullets. Taking revenge on Song for his father’s murder, Liu also discovers a confidential affair between his wife and Song… but none of Liu and Song realizes they have been shrouded in a mist of conspiracy from the very first. What is waiting for them in the darkness?

This one has actors Nie Yuan and Yu Ming-jia leading the cast for a date still pending. You can click here for this year’s trailer while the content is all pretty much the same as the one uploaded last summer with English captions. That one, you can check out below.

Review: THE DEBT COLLECTOR Pays In Full With Another Solid Adkins/Johnson Package After Five Years Of Rumors, Jamie Foxx Will Reboot Todd McFarlane’s SPAWN For Blumhouse