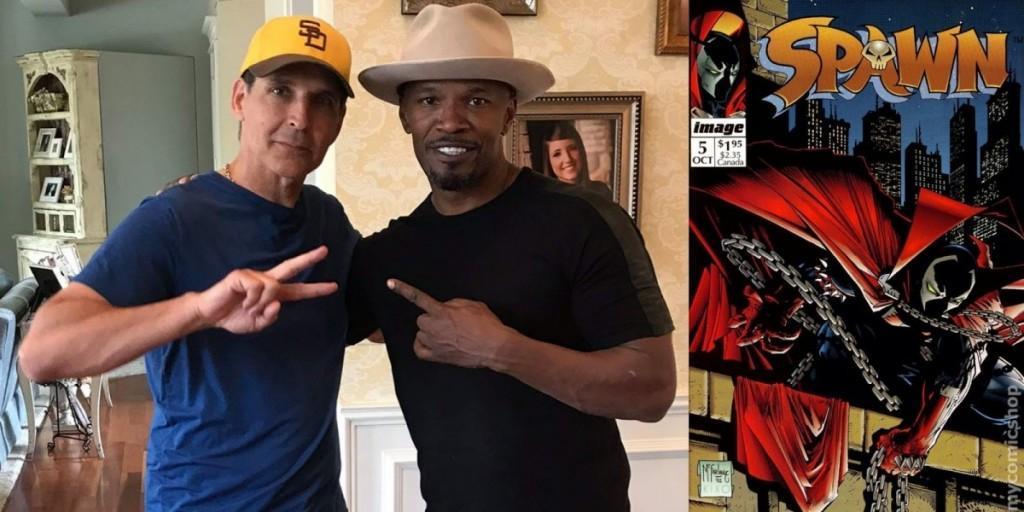 You might have come across notes in the rumor mill in the last several years over the hype of potentially casting actor Jamie Foxx for the title role of a hopeful Spawn remake. That came before creator Todd McFarlane’s announcement last summer partnering with Blumhouse for a much darker adaptation at a modest budget of about ten or twelve million dollars.
Those latter developments didn’t arise until last summer and onward when McFarlane clarified the details and inspiration of his vision at New York City Comic-Con the following Fall, and it just so happens that Foxx was reported to be circling the role about four weeks ago according to buzz over at That Hashtag Show. This week, McFarlane has all but confirmed the news showcasing talks with the actor and Jason Blum who is producing through his Blumhouse banner, thus having provided Deadline with the exclusive on Tuesday.

Foxx will play the character who started out in the comics as Al Simmons, a member of a CIA black ops team who is betrayed twice. After being set up by his cohorts to be murdered with his corpse set aflame, Newman is double crossed in Hell. He is convinced to become a Hellspawn warrior in exchange for being able to be reunited with his wife. But Spawn finds himself stuck in a demonic creature shell, and that his wife moved on and married his best friend. So this is one pissed-off antihero who attends to dispatching the scum of the city in good and evil battles that encompass Earth, Heaven and Hell.

McFarlane spoke to Deadline asserting the Sleepless star will take up the role of Al Simmons, taking the live-action mantle of the famed Image Comics character previously held in 1998 by actor and martial arts star Michael Jai White. The new film will be rebooted by none other than McFarlane himself who is quoted at Deadline with fervor in explaining his intentions to producers who are either recalcitrant or too confused by all the Marvel and DC hoopla to know what from what regarding this particular venture in which our dark, R-rated anti-hero will be a largely silent one:


“The scariest movies, from Jaws to John Carpenter’s The Thing, or The Grudge and The Ring, the boogeyman doesn’t talk,” McFarlane told Deadline, acknowledging that he’s gotten odd stares from studio suits in the past on this approach. “It confuses people because of the comic book industry, and because they all default into their Captain America mindset and I keep saying, no, get into John Carpenter’s mindset or Hitchcock. This is not a man in a rubber suit, it’s not a hero that’s going to come and save the damsel. It’s none of that. At the end of the movie, I’m hoping that the audience will say either, is this a ghost that turns into a man, or is it a man that turns into a ghost?…”

McFarlane goes a step further in reminding fans that this won’t be an origin film and will hopefully be the refreshing start of a trilogy, and cites A Quiet Place as his source of reprieve for his purpose in telling a contemporary story that doesn’t need to rehash the past – kind of like what Stephen Norrington accomplished on Blade in 1998 (in my view, at least).
McFarlane continues on, adding:

“If you want to see something creepy and powerful where you go, just what the hell was that? I’m not going to explain how Spawn does what he does; he is just going to do it… “The first movie is just saying, do you believe? And if you believe than that’s good because I’m hoping to take you for a long ride with this franchise.”

McFarlane does go into how Foxx’s approach will entail considering his gravitas as an actor and the very likelihood that he might even have to say a few lines, which does make sense:

“There are five or six moments where I’m going to need things from my actors, and a couple of them have to come from Jamie, and I’ve seen him deliver them onscreen,” McFarlane said. “He gets into a zone, with body language and a look that basically will say way more than anything i could type on a piece of paper, and this movie is going to need those moments. And in the odd moment where he has to deliver a line that’s short, curt and has impact, he can do it in a way that makes you go, ‘Whoa, I don’t want to mess with that guy. What a badass.’”

Also, apparently fans had good reason to believe the rumors seeing as how the star of Django Unchained met with the comic book creator, artist and debut director five years ago. Foxx was reported at the time having spoken publicly about his hopes toward a few roles he was “aggresively pusuing”, stating, “There’s a couple of them, Spawn…is one, yeah, and uh, Mike Tyson. Those are two roles that I would just love to, you know, get down with.”


Fast forward to McFarlane laying it all on the table on Tuesday, telling Deadline, as well as Foxx, and producer Blum:

“I never forgot him, and when I was writing this script, you sort of plug people in, and he was my visual guy and I never let go of him. When I got done and my agents and everybody was talking about what actor, I said, I’m going to Jamie first and until he says no I don’t want to think about anyone else because I’ve never had anyone else in my head. Luckily, he hadn’t forgotten either. I said, ‘Hey, I’m back to talk about Spawn again, and he was like, let’s do it.’”

“We are thrilled Jamie Foxx will be playing the title role in our movie adaptation of Spawn,” [Blum] said in a statement. “He is an incredible actor and a huge fan of the Spawn Universe that Todd McFarlane created. With the depth of talent Jamie can commit to the role and Todd at the helm bringing the world of Spawn to life, we could not be more excited for this film.”

Said Foxx: “A few years back I flew out to Arizona to meet the man behind one of the most incredible comic book characters in the universe… Todd McFarlane. He was taken aback when I told him with the enthusiasm of a young child that more than anything I wanted to put my name in the hat to embody his beloved character Spawn…. I told him no one would work harder than me if given the opportunity… well… the opportunity is here!! I’m humbled and ready to transform… and to top things off the young Jason Blum is lending his brilliance to the project! Time to be great!!!! #Spawn.”

THE BLIZZARD Chills On Line With An Action-Packed Teaser For Jang Kaiyang's Long-Awaited Crime Thriller MUSINGS OF A RONIN: A Word With SWORD OF THE DEAD Director Stephen Vitale