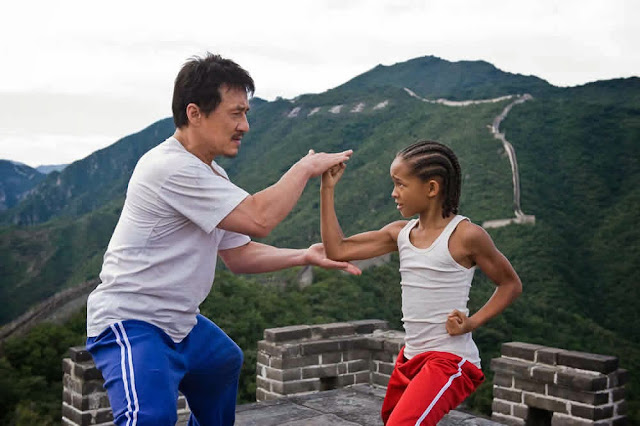 Today, international martial arts action star Jackie Chan celebrated his 60th birthday to the delight of adoring lifelong fans around the world. For some, today also marks a special treat for those who enjoyed Chan‘s role as Mr. Han, director Harold Zwart’s iteration of late actor Pat Morita’s role as Mr. Miyagi in the 2010 hit film, The Karate Kid, based on the 1984 original film of the same name.

On Monday, it was made public that Sahara and The Crazies helmer Breck Eisner would helm the long-awaited  sequel for Sony Pictures which would see actor Jaden Smith reprising his role as the character Dre Parker alongside Chan, and possibly actress Taraji P. Henson as Dre’s mother. Granted, further updates are still pending, although I absolutely enjoyed what the 2010 remake had to offer in helping showcase Smith as a physically able and talented actor who can meet the demands of exciting fight choreography, as well as the acting that suits him so well, especially with the next film that followed, After Earth. And the fact that Sony Pictures is finally moving forward with the sequel is very promising.
If part two delivers, I really hope it will make room for a part three. And what would be even more interesting to learn from here on out is if we get an encore performance at some point from either Dre’s love interest and nemesis, actress  Wenwen Han and actor Zhen Weiwang, respectively, or Asian cinema legend Yu Rongguang going toe-to-toe with Chan once again. That, along with how to reimagine a climax that captures the essence of the 1986 sequel that previously featured Awesome Asian Bad Guys co-stars Tamlyn Tomita and Yuji Okumoto, would be a terrific treat. But it also lends to the curiosity of just which new players Sony is looking to invite on board for the sequel.
Just taking a stab in the dark here, but if I were to guess how far the casting people are looking, then considering that Sony also has a stake in The Raid franchise, I would not limit my scope to just China this time. As always however, we will have to wait and see.
In the meantime, Chan‘s next two films, Skip Trace and Dragon Blade are still play as far as we know. So stay tuned for more news as it comes!
H/T: Deadline