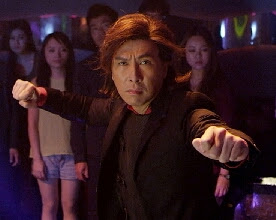 International action hero Donnie Yen has had an impressive run at the film end of things, kicking off a LOT of new projects in accordance with the startup of his new production company, Superhero Films. Showing no signs of slowing down (with a tentative exception to Ip Man 3), he is collectively promoting, filming and releasing several new movies before and after this coming New Year, which including part one of director Law Wing Cheong‘s two-part fantasy actioner, Iceman 3D.

The film, starring Yen, has a new extended trailer out this week, featuring a lot more action than its predecessor from May upon its unveiling at Cannes. The film is being pitched as the biggest modern swordsplay adventure in Chinese film, which pretty much stipulates its previously stated budget of well over 250 million RMB due in part to Yen’s reported presence in the film, in addition to Yen’s heavy aspirations to shoot the film in 3D, as well as extensive shoots and re-shoots, including the filming of a scene where a bridge had to be built since Yen was unable to get the necessary location permits.
The film has already gained positive reactions from fans while he continues to film and promote future projects, including the October release of MMA cop thriller, Special ID.
Iceman 3D is currently slated for a Spring 2014 release, and has been picked up by Well Go USA for North American distribution. The film also stars Eva Huang, Simon Yam, Wang Baoqiang, Yu Kang and Huang Shengyi, and is a reboot to the original 1989 kung fu time travel fantasy epic directed by Clarence Fok, and starring Yuen Biao and Yuen Wah.

He Ying (Donnie Yen), a highly skilled martial-arts warrior in the Ming Dynasty, becomes the only suspect in a murder of a notable official and his family. Three of his best friends are ordered to bring him into justice. While he tries to get away, an avalanche occurs and the four are all buried in deep snow. They are not dead, but frozen in suspended animation.

Four hundred years later, the frozen He Ying comes to life again, and finds himself in a modern, high-tech world. With the help of a young woman named Mei (Huang Shengyi), he learns to use a cell-phone and computer. But the problem returns when his old buddies are defrosted too. Now he needs to use his ancient martial-art skills to fight modern weaponry.