The New Teaser For KILLERS Is Online 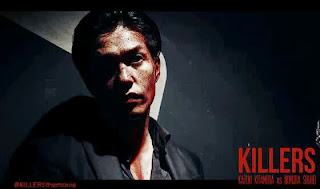 Kicking off the first day of October is the new teaser for the upcoming psychological horror thriller, Killers. The film is the latest work from acclamed directors, the Mo Brothers-Kimo Stamboel and co-writer Timo Tjahhanto, which teams them up with Japanese production company Nikkatsu, XYZ Films and Merantau/The Raid/The Raid 2 helmer Gareth Evans under his production banner, PT Merantau Films.

Killers stars Kazuki Kitamura, Luna Maya, Oka Antara, Rin Takanashi and Ray Sahetapy, and is set for release in early February 2014. For more information and further updates, visit their official Facebook and Twitter links as shown in the end of the teaser.
SYNOPSIS:

A dark psychological look into the minds of two men with nothing in common: Nomura, a self-obsessed serial killer residing in Tokyo and Bayu, a failing journalist and a struggling father in Jakarta. Connected through violent incidents, both men inexplicably start to feed off each other. As their lives become more uncontrollable, each of them starts to journey into a maze of violent self discovery.

Watch the new teaser below, exclusively from Twitch!

Rileah Vanderbilt Battles Monsters And Henchmen In A New WONDER WOMAN Shortfilm It’s All Fun And Games Until Someone Gets Spirit Bombed In The New Shortfilm, SUPER MOVES