The New Trailer For THE MAZE RUNNER: THE SCORCH TRIALS Burns Its Way Online! 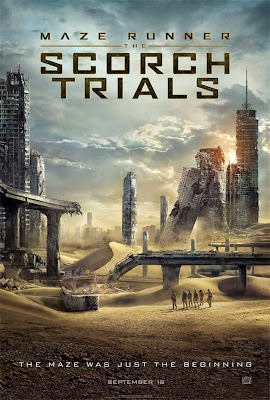 Twentieth Century Fox officially got the ball rolling with its new push for the upcoming sequel release, The Maze Runner: The Scorch Trials. It’s the second in a series of YA sci-fi novels from author James Dashner with Wes Ball returning to direct following the success of The Maze Runner, and with a franchise so visually epic in scale, it’s easy to see why fans would ultimately approve, and why this one will likely be proceeded by its third installation.

In this next chapter of the epic “Maze Runner” saga, Thomas (Dylan O’Brien) and his fellow Gladers face their greatest challenge yet: searching for clues about the mysterious and powerful organization known as WCKD. Their journey takes them to the Scorch, a desolate landscape filled with unimaginable obstacles. Teaming up with resistance fighters, the Gladers take on WCKD’s vastly superior forces and uncover its shocking plans for them all.

September 18 is the date it arrives with a script by Dashner and T.S. Nowlin, and actor Dylan O’Brien and actress Kaya Scodelario returning to star.