The New Trailer For Miike's YAKUZA APOCALYPSE Bites Back! 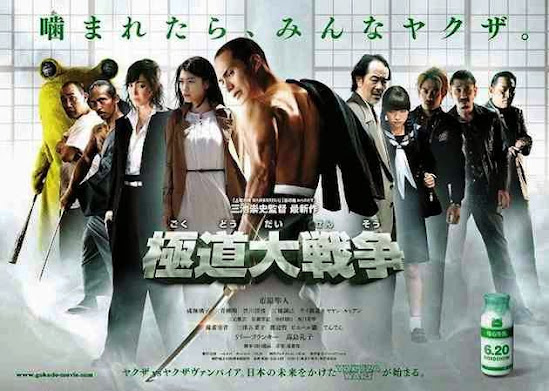 It’s only a matter of time before director Miike Takashi steps into the summer season with his latest vampire action thriller, Yakuza Apocalypse. It’s only his latest effort in keeping a promise to his long-celebrate signature style of film while we await further info on his future endeavors, and while the most recent teaser gained the film some publicity to start, we now have a minute-long trailer that lends a little more to the eye. It’s got yakuzas, vampires, some gore, badass tattoos, a better look at Yayan Ruhian in a film outside his normal Indonesian bearings…and a killer frog-suited..thing. Indeed, this looks hella fun. And random!

In the ruthless underground world of the yakuza, no one is more legendary than boss Kamiura. Rumored to be invincible, the truth is he is a vampire—a bloodsucking yakuza vampire boss! Among Kamiura’s gang is Kageyama, his most loyal underling. However, the others in the gang view Kageyama with disdain and ridicule him for his inability to get tattooed due to sensitive skin. One day, assassins aware of boss Kamiura’s secret arrive from abroad and deliver him an ultimatum: Return to the international syndicate he left years ago, or die. Kamiura refuses and, during a fierce battle with anime-otaku martial-arts expert Kyoken [THE RAID: REDEMPTION’s Yayan Ruhian], is torn limb from limb.

With his dying breath, Kamiura bites Kageyama, passing on his vampire powers to the unsuspecting yakuza. As he begins to awaken to his newfound abilities, Kageyama’s desire to avenge the murder of boss Kamiura sets him on a course for a violent confrontation with Kaeru-kun, the foreign syndicate’s mysterious and seemingly unstoppable leader!

WONDER WOMAN Gets Patty Jenkins To Direct! Place Your Bets In The New Teaser For COMIC 8: CASINO KINGS!