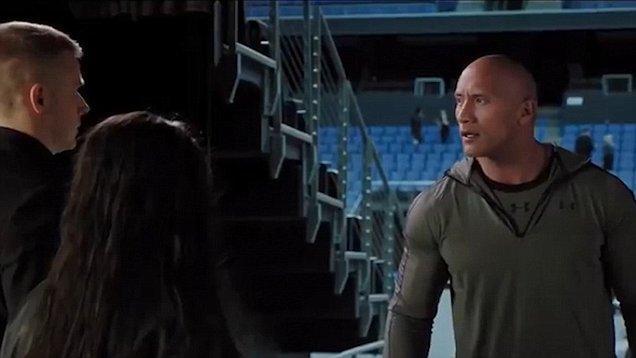 There’s no question as to whether or not 2018 has been a great year for Dwayne Johnson even as we’ve only come halfway. This Friday will see the release of his next big adventure, Rampage, with the actor readying to dominate the summer with high-rise inferno thriller, Skyscraper.
Keep these two in mind while taking a gander at the newest teaser trailer for Emmy, BAFTA and Golden Globe award winner, Logan co-star Stephen Merchant’s own sophomore directing effort, Fighting With My Family. A new clip arrived online sometime early Tuesday morning prior to MGM officially releasing it later in the evening on their channel.
Based on the true personal story of WWE Superstar Paige and her family of professional wrestlers, as translated in the Channel 4 British documentary “The Wrestlers: Fighting With My Family”, the film centers on a reformed gangster and former wrestler named Ricky and wife Julia who aspire for better lives for their children, Saraya and Zak. It’s when both sibs set out to audition for the WWE that things seemingly take a toll for the better until their demanding careers ultimately begin to fervently test the bond that once held the family together.
Actress Florence Pugh and actor Jack Lowden lead the cast as Paige and brother Zak, as seen in the clip below sharing in some electric and immortal wisdom from Johnson who plays himself in the film in addition to serving as producer through his Seven Bucks banner. The trio, along with Merchant, are joined by Lena Headey, Nick Frost and Vince Vaughn among the cast for a September 14 release.
Check out the teaser trailer below!

Creature Thriller TREMORS: A COLD DAY IN HELL Arrives For Home Release In May! MILE 22 Takes Aim With A New Still From The Movie, As Well As A New Release Date