Toshiaki Karasawa Is On Fire In The New Teaser Trailer For IN THE HERO! 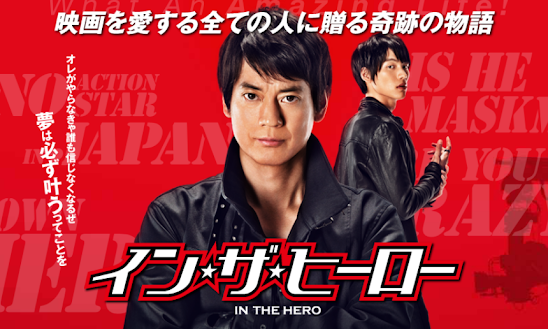 Director Masaharu Take‘s new film marks a milestone for lead actor Toshiaki Karasawa (20th Century Boys trilogy, Casshern) in a role that one might even say he was meant for. The new film, In The Hero, sees actor Karasawa as a seasoned suit actor and stunt club president forced to work on set with a young, cocky celebrity. Of course, there are more layers to this strikingly spectacular character study of differing generations of action stardom from scribe Keiya Mizuno, and while and while the sixteen-second teaser back in April didn’t illustrate much, the brand new teaser trailer offers a lot more insight in that regard, with several key movie-within-a-movie moments in relation to the parallel drama taking place.

48-year-old Wataru Honjo (Toshiaki Karasawa) is a big fan of Bruce Lee and works as a suit actor (stunts performer wearing costumes). He is also president of “Shimoachiai Hero Action Club”. Even though he doesn’t have the typical body type for his profession he has worked in the business for 25 years. Wataru doesn’t get along with cocky rookie suite actor Ryo Ichinose, but an incident draws them closer. Ryo Ichinose then takes an audition for a Hollywood movie and passes. For the fighting scene in the climax scene, the action actor quits citing the scene is too dangerous. The movie staff hears that Wataru is the best Japanese action actor and offers the job to him. Will Wataru go for it?

The film is also Karasawa‘s first Toei film since having formally trained with Toei Action Club and working as a suit actor in his teens prior to his injuries. Karasawa is joined by Kamen Rider Fourze actor, co-star Sota Fukushi, with Tomoka Kurotani, and actors Susumu Terajima, Jyo Hyuga and Masaya Kato rounding out the known cast so far. The film releases in Japan on September 6.