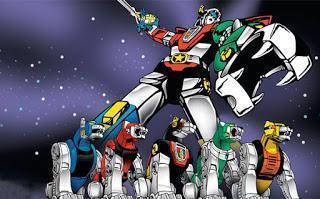 Growing up in the 1980s as a child with a love for many things action or sci-fi and fantasy, you can best bet giant robot franchises were a part of your upbringing. Animated classic Voltron in its televised evolution since 1984 through today’s Netflix offering has surely left its own impression on young minds and in the years since, and for all its worth, a live-action film was probably the next big step.

Such as it has been for well over a decade now with all sorts of rumors and long-outdated facts pertaining to the film whilst leaving the faithfuls high and dry of any hope. Well, the wait is somewhat over now with news from Deadline that reports Universal, in a package deal with Dreamworks Animation, is taking up the slack following efforts by Jeffrey Katzenberg prior to his departure from DWA as its CEO earlier this year.
X-Men and Watchmen scribe David Hayter is providing the script adapting the tale of a small squad of astronauts who find themselves as the core operators of five robotic lion-like vehicles that can combine to form one giant superhero robot. The report states that nothing is solid yet except that a script is being written and the higher ups at Universal will make a decision, though with franchises like Transformers, a Power Rangers reboot and a Robotech movie already in development, it’s possible that Voltron may very well be a thing.