UNWELCOME: Samantha Win And Dawn Marie Are More Than Meets The Eye For Two Not-So-Lucky Fellas In The Upcoming Shortfilm Thriller

I’m reminded of a crafty little shortfilm thriller I recently saw called Snake Dick. If you’re reading this and our minds are alike then you’re welcome a lesser-phallic, albiet equally gruesome concept in Unwelcome, billed as a ******** thriller with a feminist twist.

(I did that on purpose, and for good reason. Stay with me.)

Filmmaker Patrik Gardino shares the helm here with industry stunt professional, actor and director and site favorite, Shahaub Roudbari (Birds Of Prey, WandaVision), who I’ve been following for several years now, and who’s grown immensely as a capable storyteller from what I’ve noticed. With a multi-angular keeness on action and drama that draws him onto the table with a lasting versatility, he now adds Unwelcome to his list of notable work alongside actress and fellow stunt and screen talent, Samantha Win (Man Of Steel, Zack Snyder’s Justice League, upcoming Army Of The Dead) through their Prime Mate Films banner.

Both headline the cast alongside Dawn Marie (The Measure of Your Faith) and Dustin Stern-Garcia (WandaVision) for a story that immediately sets the mood in the dimming sunset of an open desert where Brock (Roudbari) and Kyle (Stern-Garcia) stumbleupon the arrival of Mallory (Win) and Tessa (Marie). Minutes later, Mallory and Tessa discover they’ve been followed by Brock and Kyle in their unrelenting pursuit of the women who are just minding their business, albeit with Tessa more acquiescencent to the pair of would-be suitors, despite Mallory’s open discomfort.

With a nifty campfire lit and the stage set, what looks to be a night of scoring with beautiful women escalates into something entirely horrible, and all the more violent and spectacular, which is why I’m purposefully being vague; I can’t stop you from looking elsewhere for info, but I like to help with the mystery. I went into this one completely blind and came out the other end of this ten-minute endeavor fully rewarded with a brilliant piece of work, co-penned by Roudbari and Win – one that grabs you by the throat, and engorges you by surprise.

Unwelcome will be released online next week on March 25. Check out the poster and a pair of stills below! 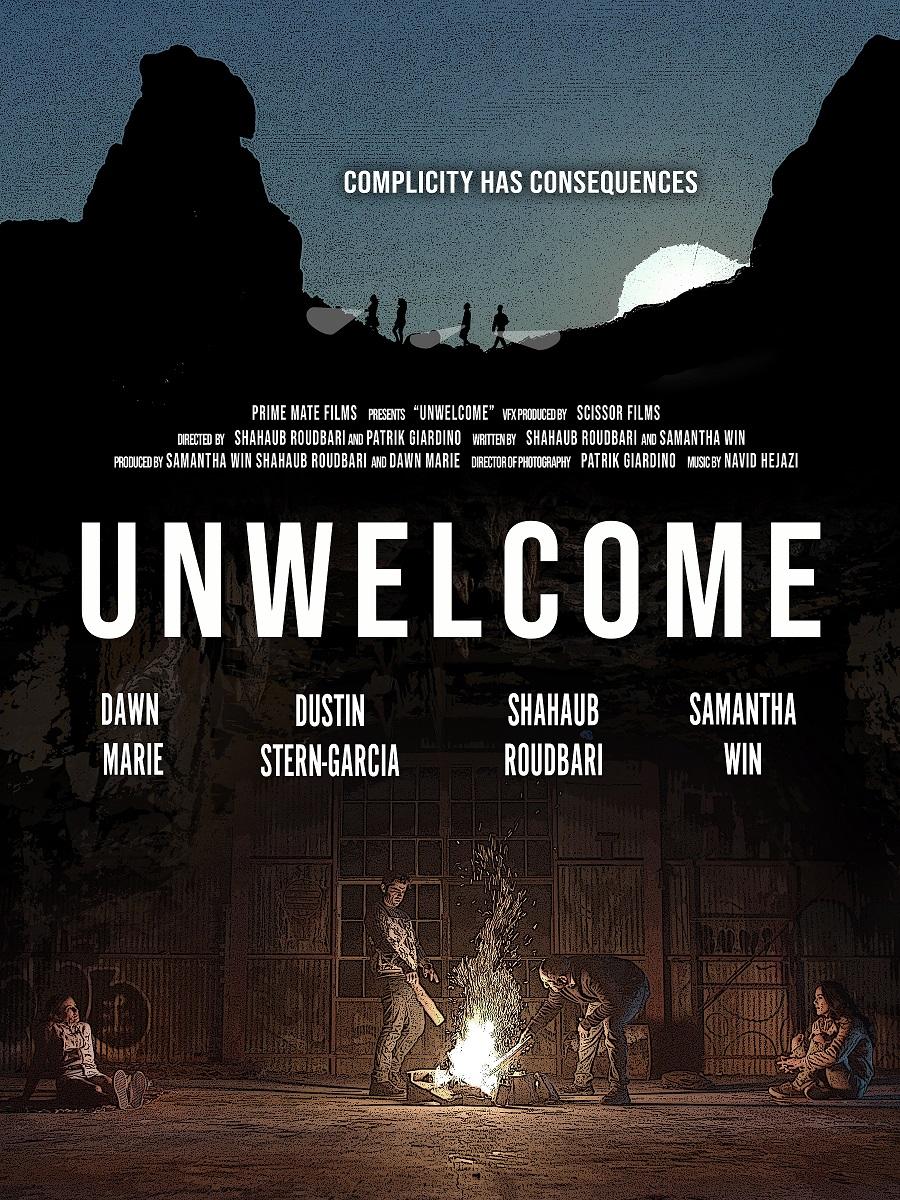 GOD OF WAR II Heads To Well Go USA For North America Your Next Read: A TALE FOR THE TIME BEING

Join Ramin Sohrab For A Night Of Thrilling Action Shorts In L.A. On January 30!