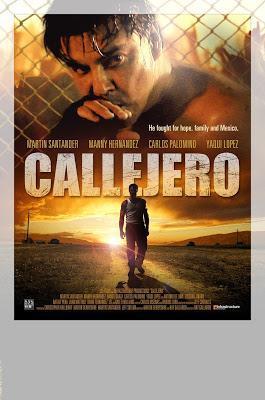 Director Ray Gallardo is well underway with a brewing career and three films currently under his belt, the second which is finally heading for a release on November 3 on VoD. I speak of the new fight drama, Callajero, which already had some teaser footage making the rounds since late last year prior to boasting sold out crowds and rave reponses from exclusive screenings in addition to its entry early this year at the Latino Film Festival.
SYNOPSIS:

For Javier, running away from the tiny border town of San Luis Rio Colorado and his professional fighter father (Carlos Palomino) when he was just a teenager meant growing up on the streets of Tijuana and being bred in the world of cartelrun underground fighting.

Years later, the grizzled veteran fighter known as Callejero, and his quicktalking everscheming manager Jose, are faced with a dilemma: Throw the next fight or face the consequences of a gambling debt owed to the cartel.

When things go awry, only a longstanding relationship with the man in charge keeps Jose and Javier alive, but they’re forced out of the fight game and Tijuana for good.

Irreparably damaged by all his years in the ring, Javier returns home alone, lost and broken. With nowhere else to turn, he tries to build a new life forging a relationship with his father, his own wayward teenage son and his son’s mother, who he all but abandoned a decade earlier.

And while nothing comes easy, the family bond begins to strengthen when Javier starts teaching his son how to box, keeping him off the streets and headed in the right direction.

But ultimately, when Jose comes to town with an opportunity to train a talented young boxer and a chance at a $100,000 purse, Javier is tempted to return to the life he left behind and torn between the need for money and his obligation to his family.

Martin Santander and Manny Hernandez star from a script by Gallardo and co-writer Martin Derbyshire. The latest trailer bares the international title, Street King, but make no mistake: Callajero is the name of the movie, so keep the title in mind when browsing on iTunes, Google Play and other digital platforms next month.
Watch the trailer below!

RESIDENT EVIL: THE FINAL CHAPTER Adds South Korean Actor Lee Joon-Gi Observe The Art Of Combat In The New TV Trailer For INTO THE BADLANDS