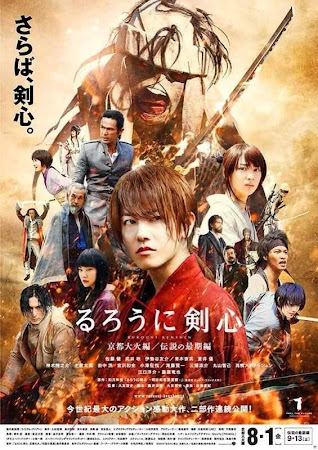 Rurouni Kenshin fans in Japan and the Philippines are getting first dibs at director Keishi Otomo‘s theatrical two-part contribution to the live-action manga franchise in just a little over a month and a half from now, and if you haven’t seen the first film on a legitimate DVD or Blu-Ray, (and if this latest study on DVDs and Blu-Ray discs won’t be an issue for you three years from now) you’re in luck. Several editions of it are already available on said platforms from various international distributors (and I’m not including the bootleg DVDs floating around out there claiming to be “all-region” and legit. If it does get legitimate U.S. distribution, you’ll hear it from me. Pinky swear).

In the meantime, if you have seen the 2012 film, then the following video now being featured at the official YouTube channel for the upcoming sequels shouldn’t be a huge spoiler for you. It’s a small five-minute recap of the first film leading up to a quick promo at the end, and it’s entirely in Japanese with no subs, but the footage should suffice nonetheless; The video also comes off of earlier news that the forthcoming movies with Takeru Satoh reprising his role as the lead will be preceded by a one-shot publication of a prequel manga focused on the principle villain, Makoto Shishio and his love interest, Yumi Komagata (played in the upcoming films by actor Tatsuya Fujiwara and actress/model Maryjun Takahashi) and will illustrate how Shishio formed his assassin organization, the Jupponagata. That publication arrives on shelves next month.
In the meantime, check out the video below, and if you’re a regular reader of my site living in Japan or the Philippines, know that the two sequels to come, Rurouni Kenshin: Kyoto Inferno, and Rurouni Kenshin: The Legend Ends, will open on August 1/August 20, and September 13/September 24 respectively in their countries on said dates.
H/T: ANN

A 'Stray' Shares Its Origins In The New Shortfilm Trailer For ALPHA SNOWPIERCER Gets A New Poster For Its U.S. Release