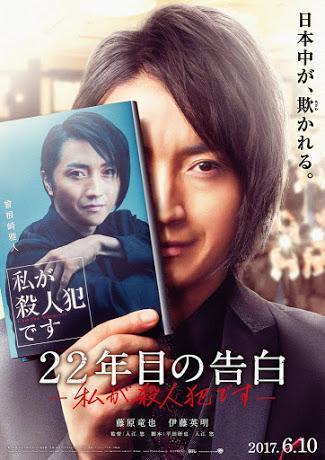 Time will tell if Joker Game helmer Irie Yu’s latest take on Jung Byung-Gil’s hit 2012 Korean murder mystery thriller, Confession Of Murder, will be nothing short of a paint-by-numbers remake or a solid movie. That said, it’s worth noting that one good reason why any film might get remade for another market is because of the potential it has for newer audiences which is understandable.

No, of course that doesn’t sit with everyone and in that case, I reckon what may sit well with fans and most moviegoers keen on Asian cinema is actor Fujiwara Tatsuya. The hairdo is an interesting one albeit fitting as he plays a as a self-imposed celebrity who comes out after years of hiding, allegedly with a new tell-all book in which he confesses his gory crimes to the world stage opposite actor Ito Hideaki (Terra Formars) starring as the vengeful cop desperate to catch his man once and for all.
SYNOPSIS:

22 years later, a murder memoir “Watashi ga Satsujinhan desu” (“I am a Murderer”) is published. The author describes himself as the killer responsible for the 5 unsolved serial murder cases. The author, Masato Sonezaki, has an attractive appearance and appears at a press conference for his newly published book.

Warner Bros. Japan finally unveiled the first trailer which you can view below. Granted, Jung’s film is an award-winning bookmark in movie history. Irie himself has his own share of accolades as well but this is still a crapshoot and an intriguing one at that, so we’ll see how this goes.
Check out the trailer now.