WB To Host Marathon Monday This December For THE HOBBIT TRILOGY 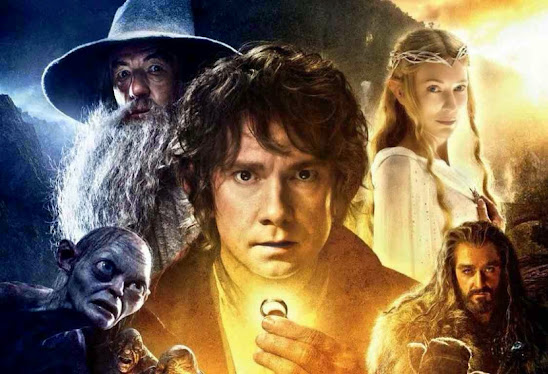 The Hobbit saga has to be one of the biggest, most beloved and successful franchises of all time. The books by author J.R.R. Tolkien already have generations of followers and while the goal toward a cinematic rendering of the epic middle-Earth saga may have been long and enduring as any journey for any Hobbit beyond the Shire, director Peter Jackson‘s passion for the immensely layered and fantastical tale has proven itself with substantial results. And as such, with the forthcoming theatrical release of The Hobbit: The Battle Of The Five Armies next month, Warner Bros. Pictures, New Line Cinema and Metro-Goldwyn-Mayer Pictures are now engaged in some major event planning to host at various theaters for screenings of The Hobbit trilogy on Monday, December 15 for all the über-fans of the property.

The studio has since issued a press release with all the official deets you need to know by this week ahead of time. Read on!

BURBANK, Calif.–(BUSINESS WIRE)–As the Studio has done in the past with such epic film series as “Harry Potter” and “The Dark Knight,” Warner Bros. Pictures, in conjunction with New Line Cinema and Metro-Goldwyn-Mayer Pictures (MGM), is once again treating über-fans to a movie marathon, this time in celebration of the highly anticipated finale of Peter Jackson’s blockbuster “The Hobbit” Trilogy. On Marathon Monday, December 15—two days prior to the third and final film’s theatrical release—moviegoers in select theaters across North America can experience Middle-earth one last time, beginning with “The Hobbit: An Unexpected Journey,” followed by “The Hobbit: The Desolation of Smaug,” and, a full 24 hours prior to its theatrical release, “The Hobbit: The Battle of the Five Armies.”

Tickets for Marathon Monday go on sale Friday, November 14 at 12:00 p.m. EST / 9:00 a.m. PST, the same date and time as tickets for opening day of “The Hobbit: The Battle of the Five Armies.” Check local listings for start times. Tickets for individual screenings of just one or two of the three films will not be sold for this event.

From Academy Award-winning filmmaker Peter Jackson comes “The Hobbit: The Battle of the Five Armies,” the third in a trilogy of films adapting the enduringly popular masterpiece The Hobbit, by J.R.R. Tolkien.

“The Hobbit: The Battle of the Five Armies” brings to an epic conclusion the adventures of Bilbo Baggins (Martin Freeman), Thorin Oakenshield (Richard Armitage) and the Company of Dwarves. The Dwarves of Erebor have reclaimed the vast wealth of their homeland, but now must face the consequences of having unleashed the terrifying Dragon, Smaug, upon the defenseless men, women and children of Lake-town.

As he succumbs to dragon-sickness, the King Under the Mountain, Thorin Oakenshield, sacrifices friendship and honor in his search for the legendary Arkenstone. Unable to help Thorin see reason, Bilbo is driven to make a desperate and dangerous choice, not knowing that even greater perils lie ahead. An ancient enemy has returned to Middle-earth. Sauron, the Dark Lord, has sent forth legions of Orcs in a stealth attack upon the Lonely Mountain. As darkness converges on their escalating conflict, the races of Dwarves, Elves and Men must decide—unite or be destroyed. Bilbo finds himself fighting for his life and the lives of his friends as five great armies go to war.

The screenplay for “The Hobbit: The Battle of the Five Armies” is by Fran Walsh & Philippa Boyens & Peter Jackson & Guillermo del Toro, based on the novel by J.R.R. Tolkien. Jackson also produced the film, together with Carolynne Cunningham, Zane Weiner and Fran Walsh. The executive producers are Alan Horn, Toby Emmerich, Ken Kamins and Carolyn Blackwood, with Philippa Boyens and Eileen Moran serving as co-producers.

The creative behind-the-scenes team is led by director of photography Andrew Lesnie, production designer Dan Hennah, editor Jabez Olssen and composer Howard Shore. The costumes are designed by Richard Taylor, Bob Buck and Ann Maskrey. Taylor is also overseeing the design and production of armour, weapons, creatures and special makeup, which are once again being made by the award-winning Weta Workshop. Oscar-winning visual effects studio Weta Digital is again handling the visual effects for the film, led by senior visual effects supervisor Joe Letteri. The hair and makeup designer is Peter Swords King. The conceptual designers are John Howe and Alan Lee. Eric Saindon is the visual effects supervisor, with David Clayton serving as animation supervisor.

New Line Cinema and Metro-Goldwyn-Mayer Pictures Present a Wingnut Films Production, “The Hobbit: The Battle of the Five Armies.” As with the first two films in the Trilogy, “The Hobbit: An Unexpected Journey” and “The Hobbit: The Desolation of Smaug,” the final film is a production of New Line Cinema and Metro-Goldwyn-Mayer Pictures (MGM), with New Line managing production. Warner Bros. Pictures is handling worldwide theatrical distribution, with select international territories as well as all international television distribution being handled by MGM.

The Hobbit: The Battle of the Five Armies – Original Motion Picture Soundtrack two-CD set will be released December 9, 2014, by WaterTower Music. It features original music by Howard Shore, Academy Award winner for the first two films in “The Lord of the Rings” Trilogy, and the original song “The Last Goodbye,” performed by Billy Boyd, who played the Hobbit Peregrin Took in “Lord of the Rings” Trilogy. A Special Edition CD version of the soundtrack will be released December 16, 2014.

Guest Review: VENGEANCE OF AN ASSASSIN (2014) Check Out The Teaser For This Mystery Project From Danish Action Team, STUNT 360