YA Novel Film Adaptation, SUPERMAN VS. THE KKK, Is In Development 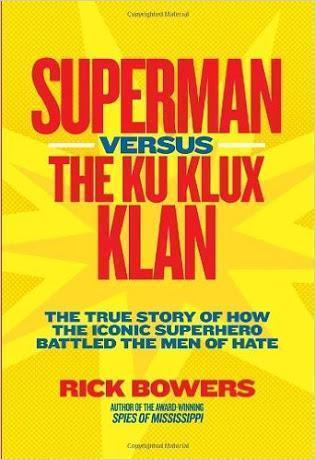 If there were ever a time for superheroes to strike a blow for racial equality on the big screen, I think now is as good a time as any and with word of a new book adaptation now the works from Lotus Entertainment and PaperChase Films. This latest update regards the 2012 YA novel, “Superman Versus The Ku Klux Klan: The True Story of How the Iconic Superhero Battled the Men of Hate”, from author Rick Bowers, from which Katherine Lindberg will adapt the screenplay for Lotus and PaperChase, and financier and executive producer Marco Vicini.

The film in question, Superman Vs. The KKK, will take its cues from the renowned DC property’s heyday as a radio show starting in 1940, wherein the film will reportedly focus its plot set in 1946 with a former Klansman who goes undercover and works with the Anti-Defamation League and the producer of the Superman radio show. Per Deadline: “The themes of this true story fall right in line with the type of stories that inspired me to want to make movies in the first place,” said Lotus Entertainment Co-Chairman Bill Johnson. “We’re delighted to be partnering with PaperChase and are looking forward to a successful and enjoyable collaboration on this film with hopefully more to come in the future.”

Said PaperChase’s Dillon Jordan, “It’s both rare and vital to have the opportunity to align with a company like Lotus, where the creative vision matches the raw determination to bring exciting, commercially viable content to the marketplace. When presented withSuperman Vs The KKK, we immediately knew we were working with a group who understand the importance of delivering profound and impactful cinematic experiences that resonate with audiences around the world.”

Producer Marco Vicini said, “The story behind Superman Vs the KKK really struck a chord with me. Right away I knew I wanted to relive it by being a part of the nonviolent resistance against oppression. It is a great honor to be able to embark on such a relevant and meaningful project with such a devoted and highly experienced team of like-minded individuals.”

Superman’s current run with Warner Bros. has a huge stake with the upcoming release of Justice League in addition to a Man Of Steel sequel, officially, as of last Fall. In the meantime, Superman Vs. The KKK feels a lot more like a stimulating, kinetic drama than anything, so I wouldn’t expect to see Clark Kent superhero-landing somewhere in Birmingham just to superpunch a some schmuck Klan wizard…even though that WOULD be a sight to see, methinks. ?

The Epic Gang Saga Continues In The First Teaser For HiGH&LOW THE MOVIE 2: END OF SKY LOGAN Is Coming To Theaters In Black And White On May 16