YO-KAI WATCH: THE MOVIE Comes To The U.S. In October For One Night Only! 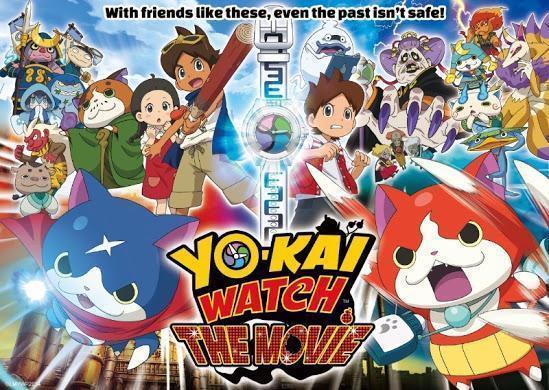 The rising popularity of the Yokai Watch franchise appears to have done wonders for manga author Konishi Noriyuki. Three years following its proliferation through numerous companies worldwide with the sales of books, toys, games and a successful current two season anime run, two animated feature films have also come into fruition with the 2014 installment, Yo-kai Watch the Movie: The Secret is Created, Nyan!.

Helmers Takahashi Shigeharu and Ushiro Shinji directed the film as well as its 2015 follow-up, Yo-kai Watch the Movie 2: King Enma and the 5 Stories, Nyan! and pending third film which premieres in Japan this December. Thus, with the trilogy in tow as it is, it appears that the former is now headed for a one-day opening in North America under the title, Yo-kai Watch: The Movie, courtesy of Eleven Arts by way of Fathom Events, and a fresh new trailer has begun running ahead of its October 15 date. Check it out below along with Thursday’s announcement!

SANTA MONICA, Calif., Sept. 8, 2016 /PRNewswire/ — LEVEL-5 abby Inc. and ELEVEN ARTS announced today that YO-KAI WATCH: THE MOVIE EVENT, the first English-language film based on the global phenomenon YO-KAI WATCH, will be in select theaters for one day on Saturday, October 15 only. The film, which features the voice talent of the hit show airing on Disney XD, follows Nate Adams and his Yo-kai friends, Whisper and Jibanyan, as they’re transported to the past to help Nate’s grandfather, Nathaniel, battle evil Yo-kai and invent the Yo-kai Watch. YO-KAI WATCH: THE MOVIE EVENT also introduces a new Yo-kai — Hovernyan, a floating blue cat who is Nathaniel’s heroic companion.

In its initial release in Japan, YO-KAI WATCH: THE MOVIE was so popular that it set a box office record for advance ticket sales and was the highest-grossing Japanese film in 2015. For this special cinema event, the film will be released in 300 select movie theaters in North America for one day only, in partnership with ELEVEN ARTS and Fathom Events. Ticketing at select theaters is available now. For a full list of theaters, visit Fathom Events’ site starting on September 16.

YO-KAI WATCH: THE MOVIE EVENT attendees will also have a chance to receive a limited-edition Hovernyan YO-MOTION YO-KAI MEDAL, while supplies last. There are four ways to play with every Yo-Motion Medal. Imagine summoning Yo-kai with the YO-KAI WATCH MODEL ZERO by inserting the medal to see an animation of that Yo-kai and to hear the character’s name and other sounds. The medals can also unlock special content in the LEVEL-5 apps Yo-kai Watch Land and YO-KAI WATCH Wibble Wobble and unlock special features and bonuses in the brand-new Nintendo 3DS games YO-KAI WATCH 2: Bony Spirits and YO-KAI WATCH 2: Fleshy Souls. Fans can also collect and store YO-MOTION MEDALS in the YO-KAI MEDALLIUM COLLECTION BOOK.

Fans who want to help Hovernyan battle the evil Yo-kai can follow his adventures from YO-KAI WATCH: THE MOVIE EVENT to the new Nintendo 3DS games YO-KAI WATCH 2: Bony Spirits and YO-KAI WATCH 2: Fleshy Souls, which will be released in stores by Nintendo on Friday, September 30 and have a deep interactive storyline that ties into the film. The YO-KAI WATCH Wibble Wobble app, which is available for free in the App Store and on Google Play, will also have a special Hovernyan limited-time event to tie into the release of the film.