Zany Comedy, Kung Fu And Card-Fu In The New Trailer For THE MAN FROM MACAU 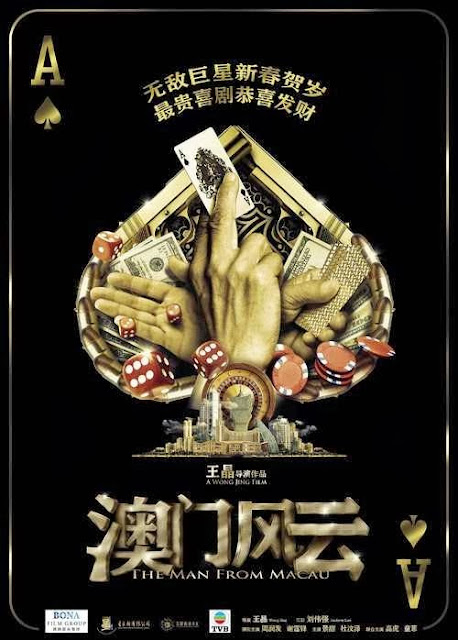 The newest trailer for China’s release of writer and director Wong Jing‘s high-flying, card tossing action adventure comedy, The Man From Macau is online ahead of its forthcoming release the weekend of January 30, 2014. Lead actor Chow Yun-Fat returns to form once more in his iconic God Of Gamblers role with Jing, along with actor Nicholas Tse in a story that engages silly comedy and a touch of romance in its blend with spectacular action, danger, and illustrious casino-lit card ballet.

Super Hacker “Show Hand” (Nicholas TSE) and Karl (Chapman TO) went to Las Vegas with their mentor, the retired swindler, Benz. They were there to visit Benz’s old buddy Hendrick (CHOW Yun Fat), a renowned master-level conman who left behind his troubled past to work as a Security Consultant for a casino.

Nobody had managed to cheat in his casino under Hendrick’s watchful eyes. Looking forward to his retirement, Hendrick invited Benz over to Las Vegas for a farewell bash.

During their stay in Vegas, Show Hand bumped into his good friend Ken. The two met and trained together in the Police Academy. Ken had recently joined a mysterious hedge fund group and was on a business trip with his boss Chairman Ko, the mastermind laundering money for corrupt officials and triad members in Asia. His ultimate plan was to cause a plummet in the New York Stock Exchange. Unbeknownst to Show Hand, Ken was an undercover Interpol agent, collaborating with the Mainland police officer, Yan to gather evidence against Mr. Ko. Yan began her investigations in Shanghai and Hong Kong while Ken gained access to Mr. Ko in Vegas. Realising he has a mole in his company, Mr. Ko put a hit on Ken. Ken managed to save the collected evidence in a USB and hide it with Show Hand before his death. The USB was accidentally taken away by Hendrick’s daughter, Charlie who had a crush on Show Hand.

Show Hand made an impression on Hendrick and was invited to go to Macau with him. Meanwhile, Mr. Ko sent a hitman to take back the USB from Show Hand. During the attack, the hitman accidently caused Charlie to fall from a building, she lost her memory in the process with no recollection of the USB she had taken.

Around The Web: Indie Action Arms Itself In KNIFE FIGHT And KING OF STICKS Kane Kosugi Highlights A New Photo With The Stunt Crew Of TEKKEN: A MAN CALLED X