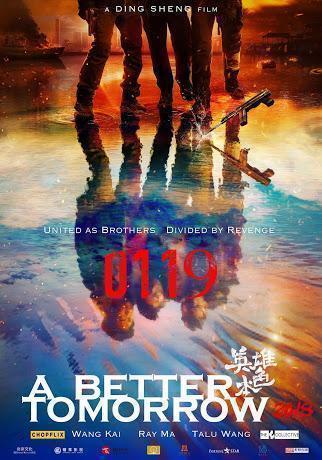 It’s arguable that not a lot can really be generally said from an opinion point-of-view about director Ding Sheng’s take on the latest heroic bloodshed reimagining, A Better Tomorrow, unless anyone’s seen the film in full; I’m not really sure myself that it’s remake in the usual sense but the director hasn’t really disappointed me in the past.

Thus, while reapproaching a classic  John Woo property may be frowned upon, time will tell of this treatment pans out or not. For now though, while the intial teaser from last year wasn’t much to go on, the latest official trailer seems to delve into the narrative more accordingly ahead of its U.S. limited open on January 19.

A former drug smuggler attempts to start his life anew and repair his relationship with his estranged brother, who is an up-and-coming star in the police department’s narcotics division.

Darren Wang, Wang Kai and Ray Ma lead the cast. North American filmgoers curious to check out the film next week can head over to Chopflix for a listing of all the cities and available theaters by then.