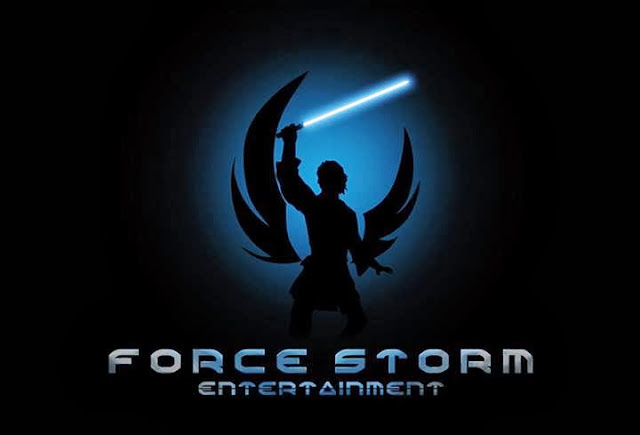 If you have been tuning into Film Combat Syndicate, chances are you have had the good fortune of coming across some of the best independently made martial arts action short films and test fights to make our way in recent years and months. More importantly, action fans, particularly fans geared toward science fiction might have even caught The Stunt People’s own Eric Jacobus with his crowdpleasing Star Wars Go Pro lightsaber Vader Strikes project. Well, here and now in 2014, the trend continues with different players and a different vision as actor and martial artist Noah Fleder initiates the newest Indiegogo campaign for his own Star Wars fan-driven action channel, Force Storm Entertainment.

Fleder briefly spoke to Film Combat Syndicate late last year about his new project as things were still in development at the time. “I grew up as a HUGE Star Wars fan all starting with the ORIGINAL film (A New Hope) and I was hooked.” he says. “I started to get all of my friends from around my block as kids playing with lightsabers and nurf guns… and then I started to read the books and play the games. Now I feel like I have the friends and resources to make my own films within the Star Wars universe.” He then added, “Also I grew up backpacking, in the outdoors doing lots of martial arts as a child growing up, so that went hand in hand with my wild imagination as far as Star Wars goes.”. As Fleder continues his journey into Force Storm Entertainment with the self-appointed task of writing, executive producing, co-coordinating and performing throughout, he won’t be alone, as he will be accompanied by some of the biggest and most impactful action performers to date, namely premier martial arts action aficionado and indepenent filmmaker Vlad Rimburg (pictured right). The two recently worked together on just a few projects last year, including producer Travis Wong’s original webseries The Hunt for the Flow YouTube channel, as well as Rimburg‘s Donnie Yen-inspired Special ID miniseries, and it’s easy to see why Fleder would choose such a great action choreographer like Rimburg in the first place. “His WILD imagination and creative process is why I love working with him.”, Fleder says of Rimburg. “His ability to capture the fighters skill on camera and develop great choreography is why I feel honored to have him apart of this project. I remember the first time I worked with him on The Hunt, he told me to think of a quick kick combination before Brendon Huor finished me in the fight. I asked him if I could do a double front kick to side kick combo in the air, and he didnt think I could do it. So he said ‘you get three shots…after that we move on.’ After my first successful attempt, he yelled ‘HELL YEA NOAH!! You can do it as many times as you want!!'”.

With filming to hopefully begin sometime this month, the ambitious new series will be aimed at illustrating varying storylines hosted with a number of fighting styles and philosophies emphasizing the use of The Force and lightsaber choreography as a whole, and will bring lead actress Mickey Facchinello on board along with Zero Gravity stunt impressario Tony Chu, and a reunion of several actors from The Hunt, including Brendon Huor, Yoshua Sudarso, Gui DaSilva and Jimmy Chhiu; That’s just for the first installment considering Fleder is hoping to do an entire series, which means future videos could very well include perfomers and actors from other teams around the country and possibly the world. But as with all things in film, this can only happen with your donation.
So if you want to see some more Jedi and Sith muscle in your martial arts entertainment and you believe in what Fleder and Rimburg have to offer, then head on over to the official Force Storm Entertainment Indiegogo page to view Fleder‘s campaign video, a list of who the selected performers listed so far with links to their respective work, and the perks with which you can benefit from your donation, and much more!
Also, be sure to LIKE the official Facebook fan page for Force Storm Entertainment as a further show of your support. And as always, may the force be with you!