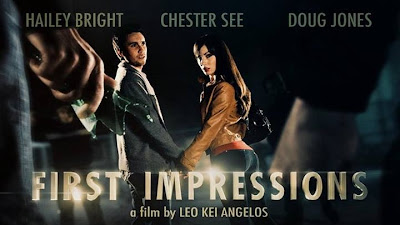 Need anymore proof that the independent filmmaking industry is upping its game? You need not look further than the latest shortfilm from the folks at Intelligent Artists and indie filmmaker Leo Kei Angelos titled First Impressions, produced and co-written by George H. Ruiz. The project began earlier this year with the stunt professionals over at Thousand Pounds Action Company training lead actress and YouTube personality, Hailey Bright.

I initially wanted to tease some of this earlier on, but unfortunately I wasn’t allowed to as things were still developing. Conclusively though, it was worth the wait, thanks in part to solid editing, and the incredible action direction from stunt coordinator Darren Bailey, and choreographers Vonzell Carter, Alvin Hsing and Brendon Huor.

First Impressions follows Bright who takes the helm as the lead action heroine, Diana, alongside co-star Chester See, as they are confronted by a horde of thugs led by a mysterious villain portrayed by the awesome starpower of actor Doug Jones, who is best known for his role as Abe Sapien in Hellboy and Hellboy 2: The Golden Army, Silver Surfer in Fantastic Four: Rise Of The Silver Surfer, and the creepy Ice Cream demon in the 2010 sci-fi horror, Legion.
As for all else, are there easter eggs? Yes. And that’s all I will say about that.
You can catch First Impressions courtesy of co-star Chester See‘s YouTube channel where you may subscribe below. And remember to follow the twitter handles that appear in the end credits.

Childhood Fantasy Meets Adolescent Reality In The New Trailer For I DECLARE WAR Is AGE OF WUSHU Getting A Movie?