An Assassin Earns His Next Gig In The New Batman Fan Short, DEATHSTROKE: ARKHAM ASSASSIN 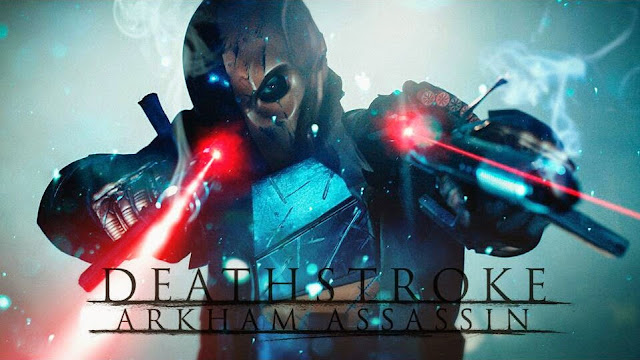 The independent filmmakers over at Going Nowhere Show have a particular knack for gearing itself toward a niche of gamer fans, particularly after the success of their 2012 Machinima Interactive Film Festival entry, The Hunger GameRs. Now in 2014, directors Larry and Chris White have likely introduced one of the most impressive online fan film shorts as of late. And if you are at all familar with Batman: Arkham game series from Warner Bros., feast your eyes on the latest gem to hit YouTube in the form of Deathstroke: Arkham Assassin.

The new shortfilm is described as an inspired prequel to last year’s release of Batman: Arkham Origins, which saw the titular character take on a city brimmimg with killers and assassins, namely the assassin for hire, Deathstroke and the notorious crimeboss, Blackmask. This time, we are offered an inspired look into just how the two formed their nefarious partnership.
Deathstroke: Arkham Assassin has already gone substantially viral in the past two days since its airing, and if you have not had the chance to see it yet, I promise you, this might be the most surprisingly, violent and entertaining little darlings you’ll ever leer at on your screen. And that really is the only way I can describe it without giving away too much away. So you are just going to have to see it, and by all means, open the description and subscribe to Going Nowhere for more exciting content!
There, that’s enough of my glossing.
Actor Jason Marnocha portrays the voices of Deathstroke and Black Mask, physically played by actor and stunt coordinator Spencer Mulligan Crusade and actor Jason Edelstein.
H/T: Chris White

The Rock Has No Fear In A New Clip From HERCULES! Survival Action Thriller RAT CATCHER Needs Your Support!